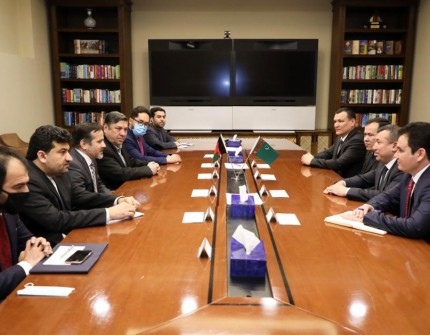 Representative of the Turkmengas state concern in the Board of Directors of the TAPI Pipeline Company Limited Muhammetmyrat Amanov and Ambassador of Turkmenistan to Afghanistan H. Ovezov met with Deputy Secretary of National Security Council of Afghanistan Ebadullah Ebad, the Foreign Ministry of Turkmenistan said.

The sides discussed implementation of measures due by end of August 2021 as tasked by the leaders of the two countries.

The concept of ensuring security of the Afghan section of the TAPI gas pipeline was signed then.

From the Turkmen side, the concept was signed by the representative of the Turkmengas state concern in the Board of Directors of the Open Joint Stock Company "TAPI Pipeline Company Limited" Muhammetmyrat Amanov, and from the Afghan side - by the Deputy Secretary of the National Security Council of the Islamic Republic of Afghanistan Ebadullah Ebad.

Ebadullah Ebad said that the security concept is an important step in the timely implementation of the TAPI gas pipeline project, including development of a security plan and protocol, which are annexes to the Host Government Agreement (HGA).