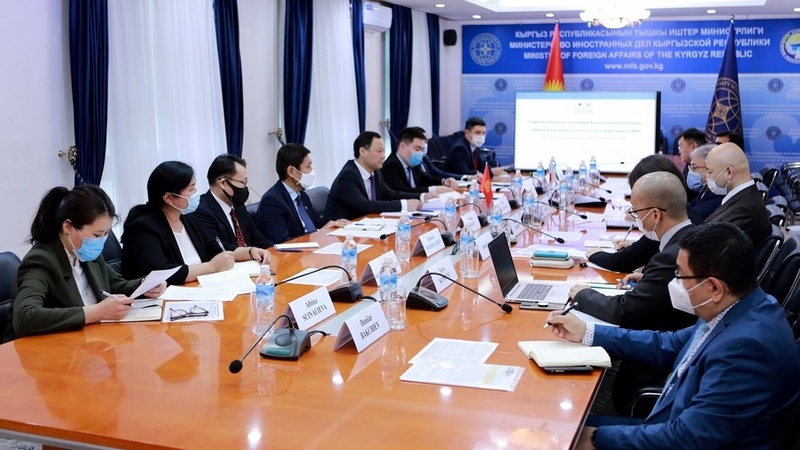 During the conversation, Foreign Minister Ruslan Kazakbaev informed the Japanese side about the internal political and economic situation in Kyrgyzstan, and also outlined the invariability of the main directions of foreign policy, including in the development of partnership with Japan. The importance of further deepening bilateral relations, including practical interaction in the field of investment cooperation, was especially emphasized.

The Head of the Foreign Ministry noted the active work of Japan International Cooperation Agency in the Kyrgyz Republic, aimed at the implementation of important socio-economic projects. A special emphasis was placed on one of such successfully implemented projects "One village - one product".

As part of the work being done to create favorable conditions for doing business in the Kyrgyz Republic, the Kyrgyz side reported on measures taken to protect foreign investors and investments, in particular in accordance with the Decree of the President of the Kyrgyz Republic Mr. Sadyr Japarov "On the protection of property and support for entrepreneurs and investors".

Touching upon issues in the field of trade, investment attraction, development of medicine, agriculture and the IT industry, Ambassador Shigeki Maeda made a presentation on the issues of economic diplomacy. Specific proposals were also mentioned to expand business ties with Japan, including using the Japan Foreign Trade Development Organization (JETRO) network.

JICA Permanent Representative in the Kyrgyz Republic Mr. Nemoto Naoyuki spoke about the main directions and programs of cooperation, the key policy of which is to support sustainable and balanced economic growth in the Kyrgyz Republic. In particular, Mr. Naoyuki informed about the ongoing work to diversify the industry and create jobs (promote the export of agricultural products, develop small and medium-sized businesses, industry and infrastructure for its diversification), as well as improve public administration and social services (training government personnel, assistance in digitalization of public administration, health issues, etc.).

As a result of the event, the parties agreed to continue fruitful cooperation, accelerate the elaboration of an agreement on the encouragement and mutual protection of investments, as well as a memorandum in the field of labor migration between the two countries.