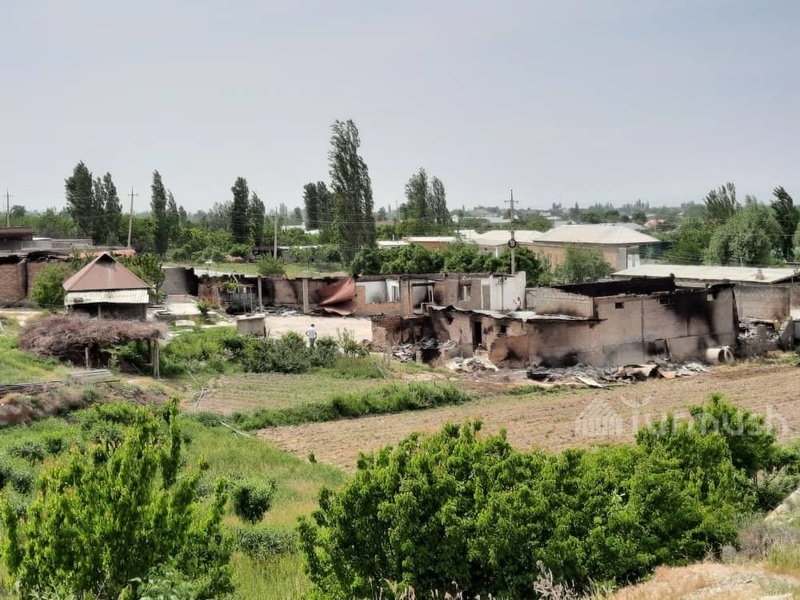 AKIPRESS.COM - Bordering village of Maksat was heavily damaged during the armed Kyrgyz-Tajik conflict on April 29.

79 houses, a school, a first-aid facility, a border checkpoint, and a police building were completely burned down.

The border post came under mortar shelling. After the explosion, the building caught fire and burnt down.

The police building was shot repeatedly. Everything inside completely burned.

Jyrgalbek Tajiev, a local resident living near the police station, said he lost his house he built just 2 years ago. The man moved with his family from the village of Kulundu to Maksat to teach schoolchildren. "What happened will never be forgotten. The Tajiks came into our village at about 6pm. I barely had time to grab my documents, two young children and flee. We left for the Baizak village," said Tajiev.

His wife Jamila Majitova worked in the first-aid facility in Maksat village. She regrets that medicines and important medical documents inside were burnt.

"The first-aid facility in Maksat village was built in 2014, three of us were working there. We had a refrigerator and a computer inside, everything has gone. My husband and children and I moved from Kulundu. He started working at the school and I started working at the medical facility. We saved money and built a house and it got burned down. We are left without shelter," she said.

The Turmush correspondent captured the trenches dug out by the Tajiks preparing themselves for an attack on Kyrgyz villages. The trenches contained food, packages and other items. As a result of the Tajik attack, 36 Kyrgyz citizens were killed and more than 180 others were injured.