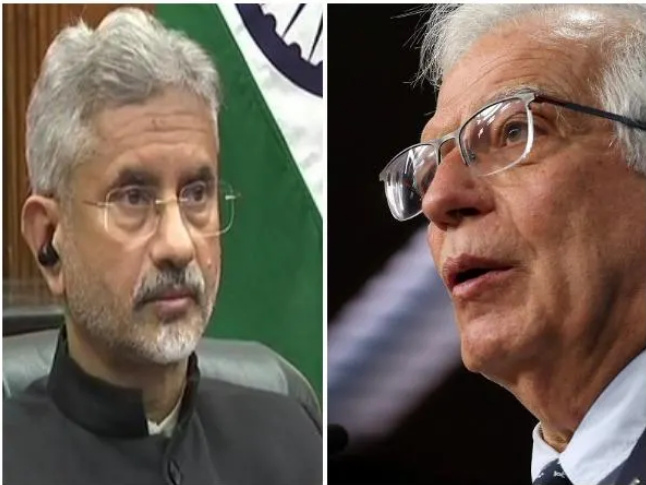 AKIPRESS.COM - India and the European Union called for an "immediate, permanent and comprehensive nationwide" ceasefire in Afghanistan and reaffirmed their strong and continued support to an inclusive, Afghan-led, Afghan-owned peace process, ANI reported.

India’s External Affairs Minister S. Jaishankar, who was in London in the first week of May for a four-day visit, held talks with EU’s top diplomat Josep Borell on May 4.

"A warm conversation with High Representative of the European Union/Commission Vice-President (EUHR/VP) @JosepBorrellF. Thanked him for the support & goodwill extended by EU during this critical time. Discussed the preparations for India-EU Leaders' Meeting," tweeted Jaishankar.

India-EU Leaders' virtual meeting was scheduled to be held on May 8 to discuss the response to the challenge posed by COVID-19 besides security cooperation, connectivity, trade, investment and fight against climate change.

According to the joint statement on Afghanistan following Jaishankar's meeting with Borell, both sides called for respecting and protecting the national sovereignty and territorial integrity of Kabul.

Jaishankar and Borrell reaffirmed that any political settlement in Afghanistan must protect the human rights and fundamental freedoms of all Afghans, including women, youth and minorities, and build upon the economic, social, political and development gains achieved since 2001 under a democratic constitutional framework.

Both reiterated that the nature of the peace settlement and its outcome will shape the future of international support and assistance. The duo jointly and firmly condemned the unacceptable level of violence perpetrated against the national forces of Afghanistan and civilians and the targeted assassinations of civil rights activists, media persons and Ulemas.

"An effective and unconditional cessation of hostilities is essential for creating the appropriate conditions for the negotiations to proceed meaningfully, for building trust between the parties, in instilling confidence in the Afghan people and for demonstrating a genuine commitment of the Taliban to lasting reconciliation," read the joint statement.

They agreed that a successful peace process requires the Taliban to engage in good faith, with a serious commitment towards finding a political solution. Both sides reiterated the importance of ensuring that the soil of Afghanistan should not be used by terrorist groups to threaten the security of India and the EU.

Recalling the India-EU Summit joint declaration on International Terrorism, both sides condemned in the strongest terms all terrorist activities and reaffirmed their strong commitment to combat terrorism in all its forms and manifestations, including its financing, the dismantling of terrorist infrastructures and countering radicalization, to ensure that Afghanistan is never again a safe haven for international terrorism.

Both underlined that the Afghanistan Conference in Geneva in November 2020 provided an important opportunity for the international community to confirm its continued commitment, both politically and financially, to a peaceful, prosperous and self-reliant Afghanistan.

As per the statement, Jaishankar and Borrell expect that the political process will lead to an Afghanistan that, as a signatory of the UN Charter, upholds and promotes the values, fundamental rights and principles enshrined therein, and does not constitute a threat to international peace and security. They will not support the restoration of the Islamic Emirate of Afghanistan, as stated in UNSC Resolution 2513.

Reaffirming that security in Afghanistan is intrinsically linked with security in the region, both agreed upon the need for Afghanistan's neighbours and regional stakeholders to be active and honest facilitators in promoting a lasting, stable and peaceful resolution of the conflict.

They underlined the importance of intra-regional initiatives promoting Afghanistan's greater economic integration and connectivity, in cooperation with all neighbours in the region, based on existing infrastructure and trading arrangements, so that Afghanistan's aid dependency can be reduced and its trade potential be realized to the fullest.

Both sides underscored the importance of access to sea and ports for the expansion of Afghanistan's trade, in accordance with the United Nations Convention on the Law of the Sea (UNCLOS) provisions.

Moreover, Jaishankar and Borrell committed to exploring initiatives to improve regional connectivity and ways to operationalize measures to facilitate trade and transit through regional development projects, including with Central Asia and South Asia, with a view to ensuring synergies and complementarities between their developmental cooperation with Afghanistan.

India is an important stake holder for peace in Afghanistan as it implements many developmental projects in Afghanistan and a large number of Afghan refugees are living in India.