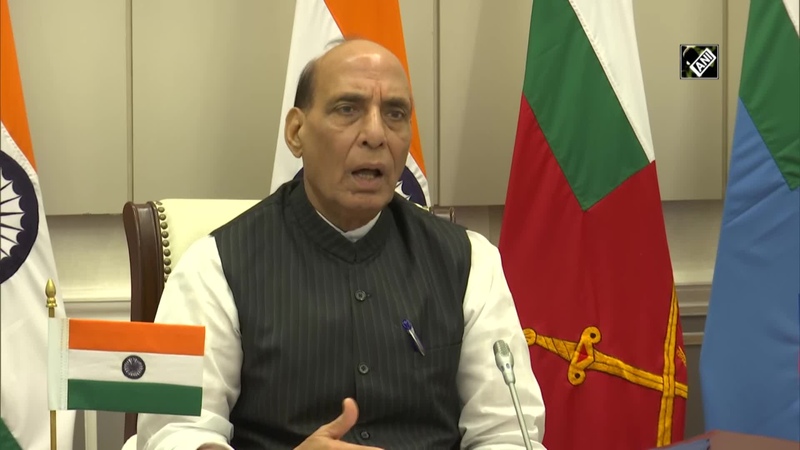 Addressing the virtual ASEAN Defense Ministers' Meeting Plus (ADMM-Plus), Singh asserted that maritime security challenges are another area of concern to India and it hopes that the Code of Conduct negotiations regarding the South China Sea will lead to outcomes that are in keeping with international law.

"India calls for a free, open and inclusive order in the Indo-Pacific, based upon respect for sovereignty and territorial integrity of nations, peaceful resolution of disputes through dialogue and adherence to international rules and laws," he said.

"India has strengthened its cooperative engagements in the Indo-Pacific based on converging visions and values for promotion of peace, stability, and prosperity in the region. Premised upon the centrality of ASEAN, India supports the utilisation of ASEAN-led mechanisms as important platforms for the implementation of our shared vision for the Indo-Pacific," he added.

Stating that the sea lanes of communication are critical for peace, stability, prosperity and development of the Indo-Pacific region, the Minister said developments in the South China Sea have attracted attention in the region and beyond.

"India supports freedom of navigation, overflight, and unimpeded commerce in these international waterways. India hopes that the Code of Conduct negotiations will lead to outcomes that are in keeping with international law, including the UNCLOS and do not prejudice the legitimate rights and interests of nations that are not a party to these discussions," he said.

Last week, ASEAN and China agreed to expedite the resumption of negotiations on the code, which were halted by the pandemic. China has overlapping territorial claims with Brunei, Malaysia, the Philippines, Vietnam and Taiwan.

China and ASEAN started negotiations in 2013 on a supposedly binding code of conduct to regulate maritime behaviour in the strategically important waterway that is claimed by China as well as ASEAN members such as Brunei, Malaysia, the Philippines and Vietnam.

Speaking at the virtual meeting, Singh said India shares a deep connect with ASEAN and has continued its active engagement in many areas contributing to regional peace and stability, particularly through ASEAN led mechanisms, such as East Asia Summit, ASEAN Regional Forum and ADMM-Plus.

"The India-ASEAN strategic partnership has been strengthened by virtue of flourishing cultural and civilizational links and enhanced people-to-people cooperation. India continues to attach importance to ASEAN centrality and unity in ensuring peace and stability in the region," he said.

Terming terrorism and radicalisation as the "gravest threats" to peace and security, the Minister said that India remains committed to combating financing terrorism as a member of the Financial Action Task Force (FATF).

"India shares global concerns about terrorism and believes that in an era when networking amongst terrorists is reaching alarming proportions, only through collective cooperation can the terror organisations and their networks be fully disrupted, the perpetrators identified and held accountable, and strong measures are undertaken against those who encourage, support and finance terrorism and provide sanctuary to terrorism," he said.