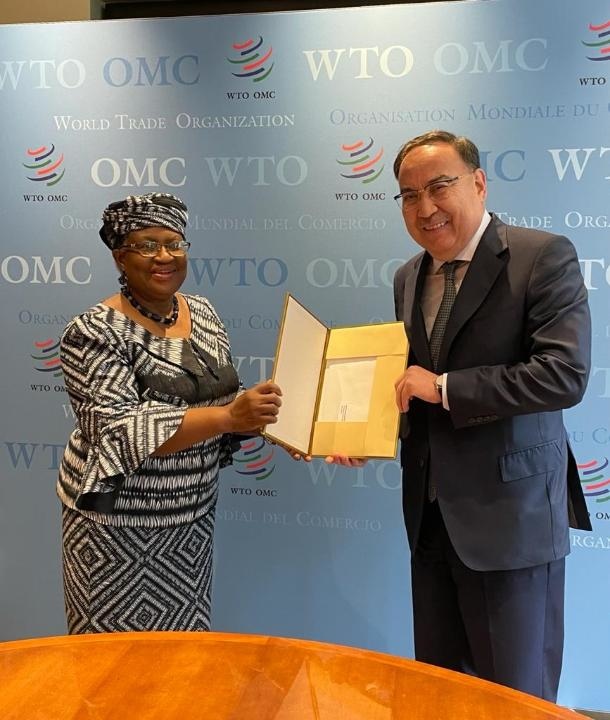 AKIPRESS.COM - Special Representative of the President of the Republic of Kazakhstan for International Cooperation Erzhan Kazykhan paid a working visit to Geneva and met with the leadership of the UN organizations, the Kazakh foreign ministry said.

During his meeting with the UN High Commissioner for Human Rights Michelle Bachelet President’s Special Representative Erzhan Kazykhan discussed most important issues of Kazakhstan’s cooperation with the UN human rights office. Both sides noted a vast experience of interaction to improve human rights legislation and its implementation practices as well as Kazakhstan’s significant progress in the area of human rights.

The High Commissioner commended achievements and political reforms in Kazakhstan and specifically mentioned the President’s Decree of 9 June «On further measures in the field of human rights» and main objectives of the National plan of priority measures in the field of human rights. The High Commissioner accepted with sincere gratitude the personal letter from the President of Kazakhstan Kassym-Jomart Tokayev with an invitation to visit Kazakhstan in the near future.

The meeting with WTO Director General Ngozi Okonjo-Iweala was an opportunity to broadly discuss the content and preparations for the WTO’s 12th Ministerial Conference, which will be held for the first time under Kazakhstan’s chairmanship in the end of 2021 in Geneva. Erzhan Kazykhan highlighted that close cooperation with the WTO is in the interests of Kazakhstan's development and assured the head of the WTO of our country's full support of Organization's initiatives aimed at ensuring equitable trade and fair access to vaccines, as well as restoring the global economy.

The WTO Director General underlined that Kazakhstan is one of the most reputable member-states of the Organization and expressed gratitude to our country for its constant and systemic support of WTO's work. Ngozi Okonjo-Iweala conveyed an official invitation to President Tokayev to participate personally in the opening of the upcoming conference in Geneva.

Promotion of Kazakhstan's initiatives in the field of disarmament, climate change, KazAID’s humanitarian work and Sustainable development goals were discussed during the meeting with the head of the UN Office in Geneva Tatiana Valovaya. Erzhan Kazykhan noted the relevance of the initiative of President Tokayev to establish an International Agency for Biological Safety, stressed the importance of the UN support for events dedicated to the 30th anniversary of the closure of the Semipalatinsk test site and the 15th anniversary of the signing of the Treaty on the establishment of a nuclear-weapons-free zone in Central Asia.

Kazakhstan counts on the assistance of the UN Geneva office in implementation of regional projects on the basis of the UN Center in Almaty for the countries of Central Asia and Afghanistan, particularly with regard to low-carbon development, transboundary water issues, food security, women entrepreneurship, gender equality.

During the meeting with WHO’s senior officials the parties discussed the follow-up to the talks between President Tokayev and WHO Director-General Tedros Ghebreyesus. An exemplary cooperation between Kazakhstan and WHO in the area of primary health care opens new horizons for interaction in implementing the initiative of Kazakhstan’s President to create a network of regional centers for disease control and biosafety under the auspices of the United Nations linked with the WHO «One Health» program aimed at detecting and preventing outbreaks of zoonotic infections.

WHO Deputy Director General Zsuzsanna Jakab commended Kazakhstan’s efforts to fight the COVID-19 pandemic, the pace of national vaccination campaign and expressed readiness to facilitate the earliest possible certification by WHO of the «QazVac» vaccine, which may be also used for providing assistance to other countries.

During the visit, Special Representative Erzhan Kazykhan also met with the leadership of the International Labor Organization (ILO) and the UN Economic Commission for Europe.