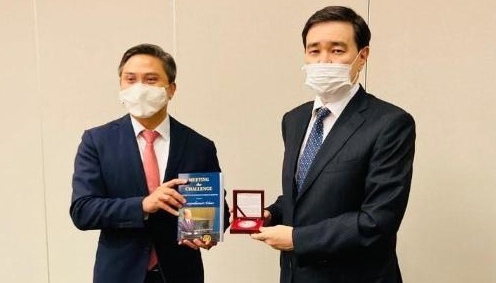 AKIPRESS.COM - Ambassador of Kazakhstan to Singapore Arken Arystanov held a meeting with a member of the Parliament of Singapore, the Head of the Friendship Group with the Regions of the Middle East and Central Asia, Mr. Saktiandi bin Supaat, to discuss the current state of affairs and prospects for the development of inter-parliamentary cooperation, as well as interaction at the level of friendship groups.

The Ambassador presented a briefing on the main events in the political life of Kazakhstan that have taken place since the beginning of this year, which is marked by the celebration of the anniversary date – the 30th anniversary of the celebration of the Republic of Kazakhstan. He also shared the Embassy's plans for establishing inter-parliamentary cooperation, the Kazakh foreign ministry said.

In turn, Mr. Supaat welcomed the establishment of the Friendship Group with Singapore in the Parliament of the Republic of Kazakhstan and expressed interest in further enhancing cooperation between countries across the entire spectrum of bilateral cooperation.