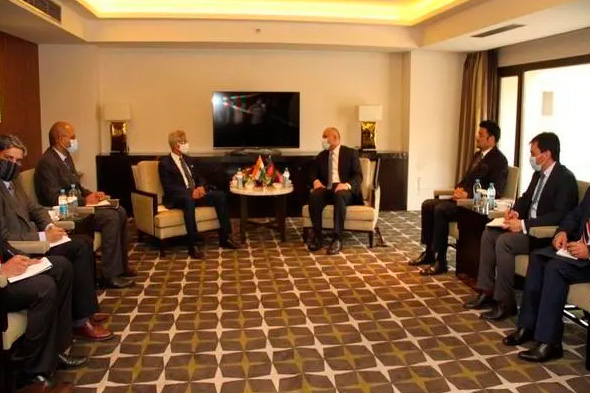 Jaishankar with his Afghan counterpart Mohammed Haneef Atmar in Dushanbe on Wednesday. (PTI)

AKIPRESS.COM - India’s foreign minister S. Jaishankar in his address at the SCO foreign minister’s meeting in Dushanbe on July 14 underlined combating terrorism and extremism, and checking of terror financing, as the key purpose of the SCO, The Indian Express reported.

On Afghanistan issue, Jaishankar said that the world, region and the Afghan people all want the same end state: An independent, neutral, unified, peaceful, democratic and prosperous nation… The future of Afghanistan cannot be its past. A whole new generation has different expectations. We should not let them down.

He added, “The world is against the seizure of power by violence and force. It will not legitimize such actions… An acceptable compromise that reflects the Doha process (talks in Qatar), Moscow Format (led by Russia) and Istanbul Process (an initiative of Turkey and Afghanistan) is essential.”

Jaishankar called for “ceasing violence and terrorist attacks against civilians and state representatives”, settlement of conflict “through political dialogue”, respect towards “interests of all ethnic groups”, and ensuring that “neighbors are not threatened by terrorism, separatism and extremism”.

The challenge, the Minister said, was to “act seriously and sincerely on these beliefs”, because there are “forces at work with a very different agenda”.

Apart from the situation in Afghanistan, he said public health and economic recovery were pressing issues facing the region. Underlining “One Earth One Health”, he urged early universal vaccination against Covid-19, and pressed for “reformed multilateralism”.

On the sidelines of SCO foreign ministers meet, India’s foreign minister S Jaishankar met with his Afghan counterpart Mohammed Haneef Atmar in Dushanbe on July 13, to discuss political and security situation, peace process, and India's cooperation with Afghanistan in various fields, including the joint fight against terrorism and the establishment of lasting peace and stability in Afghanistan and the region.

India assured continued cooperation to Kabul in strengthening regional and global consensus to achieve a political settlement in the country.

Atmar elaborated the political and security situation in Afghanistan, the outcome of Afghan President's visit to Washington DC, and the United States continued support and cooperation with Afghanistan. Atmar said overcoming this common threat was of vital importance to regional security.

Atmar also underscored the constructive role of India in strengthening regional consensus on the Afghan peace process and the preservation of the achievements of the last two decades.

India has pulled out its officials and staffers from its consulate in Kandahar in the past few days and is monitoring the situation in Mazar-e-Sharif where it has another consulate. Last year, officials and personnel at the consulates in Herat and Jalalabad had been evacuated amid the Covid-19 pandemic. However, the Indian Embassy in Kabul is still functional at full strength.