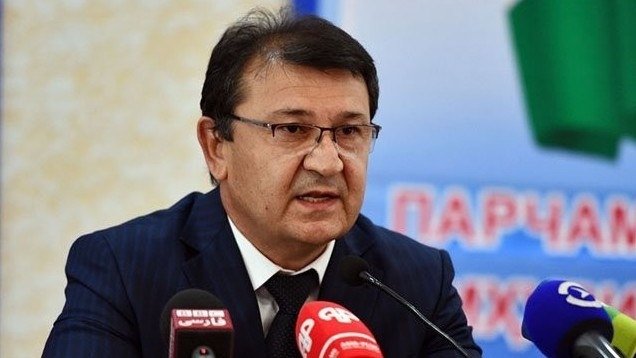 Speaking on condition of anonymity, the sources in the Interior Ministry and the Health Ministry told RFE/RL  on July 26 that Health Minister Jamoliddin Abdullozoda, the chief of the presidential medical center, Kholmuhammad Rahimzoda, and several other health officials and physicians were attacked on July 20 right after Rahmon's 64-year-old sister Qurbonbi Rahmonova died from the coronavirus.

According to the sources, the minister and other health officials were "severely injured" in the attacks. The sources also said that Tajik authorities had invited medical experts from Germany, Russia, and Uzbekistan to treat Rahmon's sister.

The sources said a preliminary investigation has been launched into the attacks.

No one from the government, presidency, or other authorities would comment publicly on the allegations.

Abdullozoda was not present at a July 26 press conference in Dushanbe devoted to Washington's move to supply Tajikistan with COVID-19 vaccines.

A day earlier, Tajikistan received 1.5 million doses of the Moderna shot donated by the United States via the international vaccine distribution system known as Covax.

When asked by a reporter about whether the absence could be linked to rumors of the beatings, Deputy Health Minister Shodikhon Jamshed rejected the question.

Rahmon's sister was buried on July 21. Although the official cause of death was not made public, physicians at a hospital in the Tajik capital told RFE/RL that she died of COVID-19.