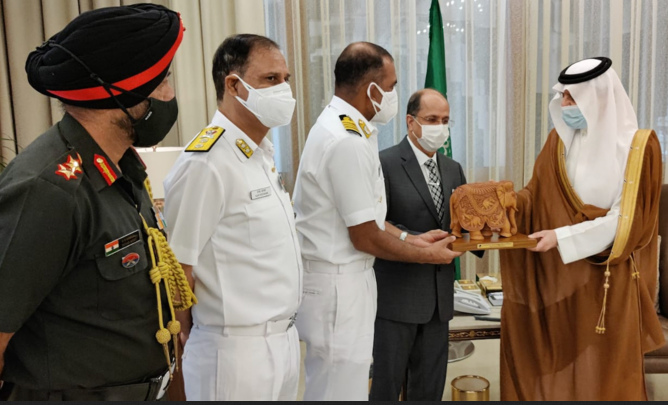 AKIPRESS.COM - India and Saudi Arabia have embarked on a well-trodden journey toward enhancing bilateral relations in a variety of different fields, including trade and business, infrastructure development, commerce, medical research, and people-to-people exchanges, Arab News reported.

Now the two countries have added defense cooperation and military training to that list. Navies of both the countries have started their first-ever joint exercise, called the “Al-Mohed Al-Hindi Exercise”. Indian Naval ship INS Kochi, a flagship destroyer for the Indian Western Naval Fleet, is docked in Jubail as part of the exercise.

Indian Navy in a statement said that its “visit to Kingdom of Saudi Arabia was set rolling with the Flag Officer Commanding Western Fleet (FOCWF), Rear Adm Ajay Kochhar visiting the Fleet Cdr of Royal Saudi Navy’s Eastern Fleet, Rear Adm Majid Al Qahtani” on August 10, which was held at the King Abdul Aziz Naval Base, “the Headquarters for Saudi Eastern Fleet”.

It mentioned that Kochhar also visited the King Fahd Naval Academy and met with the Commandant Rear Admiral Faisal Bin Fahd Al Ghufaily. He called on the Governor of Eastern Province of the Kingdom of Saudi Arabia, Saud bin Nayef Al Saud at Dammam on August 11.

The harbor phase of the “Al-Mohed Al-Hindi 2021” exercise began on August 9 and the sea-based drills started August 11.

Defense relations between both the countries constitute a significant element of shared strategic vision for the region and this first bilateral naval exercise is a testimony to India’s strong ties with Saudi Arabia. “The naval exercise will assist in promoting understanding and furthering interoperability between the two Navies.”

India’s Western Fleet commander was aboard the ship for the first exercise as the India-Saudi naval training will include a number of sea exercises and maneuvers.

Indian naval assets have been increasingly deployed to address the maritime concerns within the region. Indian Navy has assisted countries in the region with hydrographic surveys, search and rescue, and other capacity-building and capability-enhancing activities.

The warship arrived in Saudi Arabia after carrying out a similar Naval exercise with the UAE Navy off the coast of Abu Dhabi on August 7.

The Indian Naval ship INS Kochi is one of three Kolkata-class stealth guided-missile destroyers, equipped with sophisticated digital networks along with state-of-the-art weapons and sensors to neutralize any threat from the air, sea, or from underwater.