Coronavirus in Kyrgyzstan
Support Subscribe Log in
KyrgyzstanKazakhstanMongoliaTajikistanTurkmenistanUzbekistanWorld
art & entertainmentbusinesseconomyeducationenvironmentfinanceforeign policyhealthjustice & crimelifeopinion & analysispoliticssciencesporttechnologytravel
World|politics|August 23, 2021 / 12:49 PM
None of us are safe until all of us are safe: India's external affairs minister Jaishankar draws parallels between Covid, terrorism at UNSC 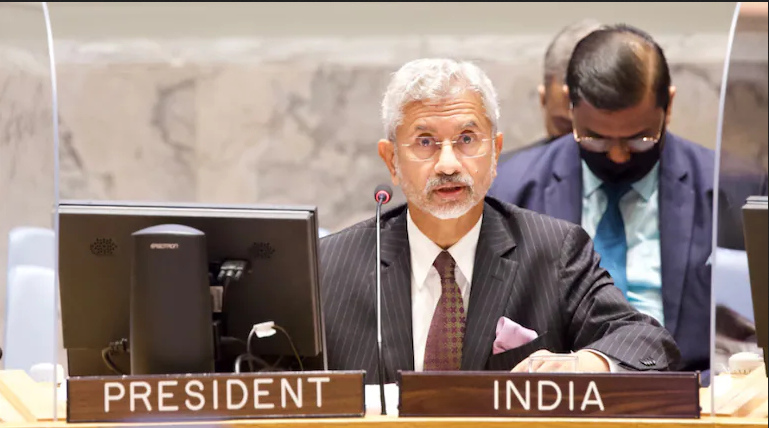 AKIPRESS.COM - Addressing a high-level UN Security Council(UNSC) briefing on threats to international peace and security by terrorist acts, on August 19, India’s External Affairs Minister S. Jaishankar said what is true of Covid is even truer of terrorism - none of us are safe until all of us are safe, India Today reported.

India recognises that terrorism cannot be and should not be associated with any religion, nationality, civilisation or ethnic group, the minister said, adding that the world must never compromise with the evil of terrorism.

Jaishankar said terrorism in all its forms and manifestations must be condemned. There cannot be any justification, regardless of motivations, he asserted.

"We, in India, have had more than our fair share of challenges and casualties. The 2008 Mumbai attack, the 2016 Pathankot airbase attack and the 2019 suicide bombing of our policemen at Pulwama. We must never compromise with this evil," Jaishankar told the United Nations Security Council.

The minister said: "When we see state hospitality extended to those with innocents' blood on their hands, we should call out their double-speak.”

"Events unfolding in Afghanistan have naturally enhanced global concerns about their implications for both regional and international security," the minister said. He told the UNSC that countries should not place “blocks and holds” on requests to designate terrorists without any valid reasons.

The radicalisation of vulnerable youth by systematic online propaganda campaigns remains a serious concern, Jaishankar said, referring to terror recruitment. He added, "ISIS's financial resource mobilisation has become more robust. Rewards for killings are now even being paid in Bitcoins.”

Referring to the fourth International Day of Remembrance and Tribute to Victims of Terrorism on August 21, the minister echoed the sentiments of the UN Security Council that next month will mark 20 years of 9/11 tragedy in New York.

During his visit to New York, the Indian minister met UN Secretary General Antonio Guterres in the United Nations on August 17 and discussed the situation in war-torn Afghanistan.

Jaishankar attended the UN Security Council emergency meeting on the situation in Afghanistan on August 16. The UNSC meeting, the second time in just over 10 days, was held under India's Presidency to discuss the rapidly deteriorating and unraveling situation in the war-torn country.

He also discussed the latest developments in Afghanistan with US Secretary of State Antony Blinken and "underlined the urgency of restoring airport operations in Kabul. State Department spokesperson Ned Price said that Blinken spoke with Jaishankar "about Afghanistan and the developing situation there.”

During the August 16 meeting on Afghanistan, India’s permanent representative to the UN said that "India has contributed significantly in recent years to the development of the country in critical areas of power, water supply, road connectivity, healthcare, education, agriculture and capacity building. India's emphasis has been on the welfare and well-being of the people of Afghanistan. Before the current crisis unfolded, India had ongoing development projects in every one of the 34 provinces of Afghanistan”.

He also said: "as underscored by Council members, we need to continue to support the robust work of UNAMA and ensure their safety. We call upon the parties concerned to maintain law and order, ensure the safety and security of all concerned, including UN, diplomatic and consular personnel, and observe human rights and international humanitarian law in all circumstances in Afghanistan.”

India is holding the presidency of the UN Security Council for the month of August and has hosted crucial discussions on maritime coordination and security and peacekeeping operations, among other key issues.