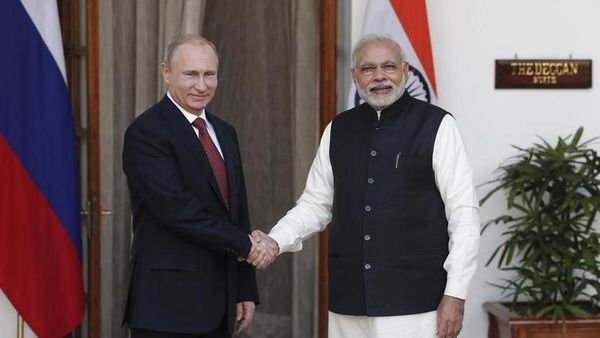 “During the exchange of views on the situation in Afghanistan, the sides noted the importance of coordinated efforts which would contribute to the establishment of peace and stability in this country, ensuring security in the region as a whole," the Russian statement said.

Russia, India and Iran were previously the main backers of an anti-Taliban alliance when the Islamist group was last in power in Kabul between 1996-2001.

Since the overthrow of the Taliban in 2001, Russia and Iran have been wary of the presence of the US in Afghanistan. The two countries have also been holding talks with the Taliban with speculation rife that Moscow and Tehran could recognize the group that took control of Kabul on 15 August.

New Delhi has been very cautious on issues relating to the Taliban – first stating that the group would have legitimacy issues if it took power by force and then later nuancing it to the slam only Haqqani group and groups like the Lashkar-e-Taiba (LeT) and the Jaish-e-Mohammed (JeM). While the Haqqani group has targeted the Indian embassy in Kabul, the LeT and JeM foment terrorism in Kashmir.

According to the Russian statement, Modi and Putin "expressed (their) intention to enhance cooperation on countering the dissemination of the terrorist ideology and the drug threat emanating from the territory of Afghanistan." "It was agreed to form a permanent bilateral channel for consultations on this issue," it added. "A number of questions pertained to further development of the Russian-Indian relations of the special and privileged strategic partnership, including in trade and economy, were also touched upon," it said.

Modi expressed gratitude to Putin for assistance in combating the spread of the covid-19 infection, including supply and production of the Russian vaccine in India, as well as shipment of the necessary medicines and medical equipment, it added.

Meanwhile, at a special session of the UN Human Rights Council in Geneva, India’s Permanent Representative, Indramani Pandey called on "parties concerned to maintain law and order, ensure the safety and security of all Afghan nationals, UN personnel and diplomatic staff members, and observe human rights and international humanitarian law in all circumstances in Afghanistan."

"While the security situation remains precarious, a grave humanitarian crisis is unfolding. Everyone is concerned about the increasing violations of fundamental rights of Afghan citizens. Afghans are worried about whether their right to live with dignity would be respected," he said.

India hoped that an "inclusive and broad-based dispensation which represents all sections of Afghan society" would take office in Kabul not just those representing the Taliban but also the Tajiks, Hazaras, Uzbeks and others.

Stating that stability in Afghanistan is linked to the peace and security of the region Pandey said, "We hope that the situation in Afghanistan does not pose a challenge to its neighbors and its territory is not used by terrorist groups such as Lashkar-e-Taiba (LeT) and Jaish-e-Mohammed (JeM), to threaten any other country."