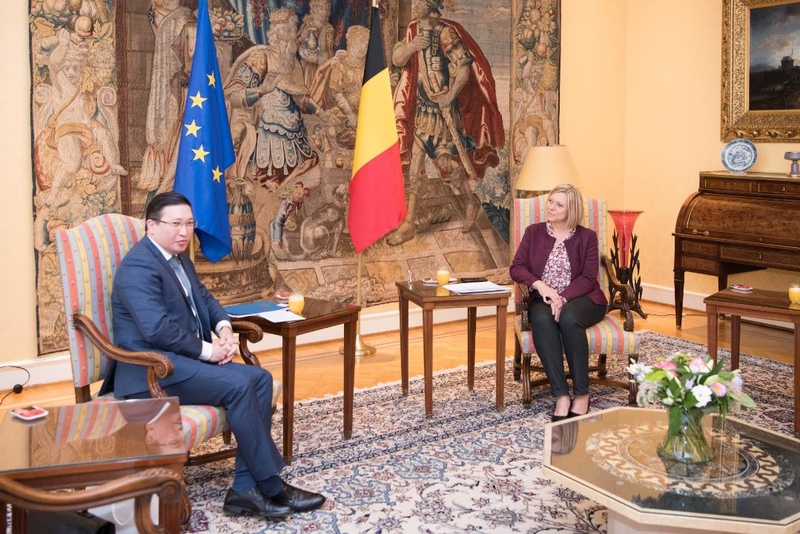 AKIPRESS.COM - Ambassador of Kazakhstan to Belgium Margulan Baimukhan met with the Chairman of the House of Representatives of the Parliament of Belgium Eliane Tillieux. They discussed the bilateral cooperation between Kazakhstan and Belgium, the Kazakh Foreign Ministry said.

The Ambassador spoke about the ongoing political and socio-economic reforms in Kazakhstan, initiated by the President Kassym-Jomart Tokayev within the framework of the concept of the "listening state." The issues of vaccination in Kazakhstan and production of the Kazakhstani vaccine QazVac were also touched upon.

Ms Tillieux gave a positive assessment of the socio-political transformations and the level of vaccination of the population in Kazakhstan.

Discussing the issues of expanding inter-parliamentary ties between the two countries, the Belgian side noted the growing dynamics of the inter-parliamentary dialogue between the two countries. According to Ms Tillieux, online negotiations with the Chairman of the Majlis of the Parliament of Kazakhstan Nurlan Nigmatulin in May 2021, as well as a trilateral meeting of two speakers of the Belgian parliament with the head of the Majilis on September 8, 2021 in Vienna within the framework of the 5th World Conference of Speakers of Parliaments gave an additional impetus to development of the inter-parliamentary dialogue.

The parties also welcomed the ongoing development of cooperation between the parliamentary friendship groups. The last meeting of the Chair of the Committee on International Affairs, Defense and Security of the Majilis of the Parliament Aigul Kuspan with the Head of the Interparliamentary Group on Cooperation Belgium - Central Asia Tim Vandenput was held in June 2021.

In the context of economic diplomacy, the parties welcomed the upcoming visit of Belgian enterprises to Kazakhstan, planned in November 2021 with the support of the Belgian investment agencies AWEX and FIT. Today, Belgium is one of the largest investors in the economy of Kazakhstan, with the volume of Belgian investments exceeding 9 billion US dollars. A separate topic of conversation was the development of civil society, gender equality in Kazakhstan, higher education, ecology, regional security and the situation in Afghanistan. The Belgian politician, noting the significant role of women in political life, welcomed the growing number of women in the Kazakh Parliament and political parties. In addition, the situation around the Aral Sea, Kazakhstan’s efforts to combat climate change in the context of the upcoming UN Conference on Climate Change in Glasgow (COP-26) were also raised. Answering questions, the Kazakh diplomat also spoke about the international initiatives of the First President of Kazakhstan Nursultan Nazarbayev in the nonproliferation of nuclear weapons and the Semipalatinsk nuclear test site, the 30th anniversary of its closure is marked this year.

At the end of the meeting, the Ambassador reaffirmed the invitation of the Kazakh side for Ms Tillieux and other Belgian MPs to visit Kazakhstan soon.