Coronavirus in Kyrgyzstan
Support Subscribe Log in
KyrgyzstanKazakhstanMongoliaTajikistanTurkmenistanUzbekistanWorld
art & entertainmentbusinesseconomyeducationenvironmentfinanceforeign policyhealthjustice & crimelifeopinion & analysispoliticssciencesporttechnologytravel
World|politics|September 27, 2021 / 09:53 AM
US President Biden: Bilateral ties with India is destined to be 'stronger, closer and tighter' 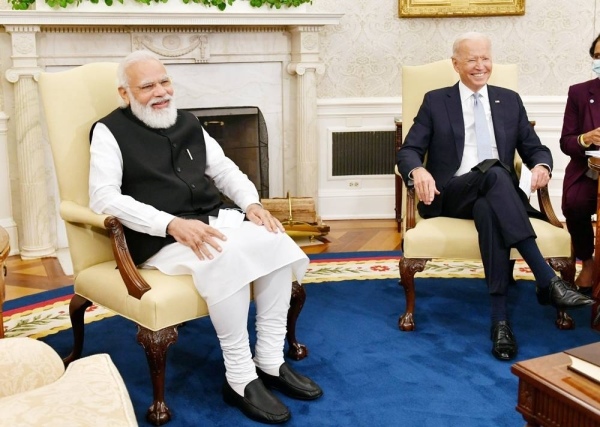 AKIPRESS.COM - US President Joe Biden said bilateral ties between India and the US, the world's two largest democracies, is destined to be "stronger, closer and tighter, as he hosted Indian Prime Minister Narendra Modi at the White House on September 24 for the first bilateral meeting and discussed a wide range of priority issues, including combating COVID-19, climate change, trade and the Indo-Pacific, Saudi Gazette reported.

Biden and Modi started their talks with comments on the promise of the India-US relationship, the areas they would work on like COVID-19 and climate and the importance of the Diaspora. Their opening remarks were sprinkled with jokes and laughter, interspersed with a serious outlining of the discussions ahead.

Both leaders suggested that the countries were at an inflection point in their relationship. Modi spoke of a “transformative” decade ahead and Biden spoke about a “new chapter” in ties.

Modi said that under Biden’s leadership the seeds had been sown for India-US relations to expand and that they were entering a “transformative phase”. In this context, he mentioned the growing importance of people-to-people ties, and said Indian talent would be a “full partner” in this relationship.

Biden said the two countries were launching a “new chapter” in bilateral ties, taking on some of the toughest challenges, starting with COVID-19. He also said climate and ensuring stability in the Indo-Pacific, including with Quad partners, would be on the agenda for talks.

The US-India relationship could help solve an “awful lot” of the world’s challenges, he said. “I think that the relationship between India and the United States, two of the largest democracies in the world, is destined to be stronger, closer and tighter, and I think it can benefit the whole world,” Biden added.

Modi also raised the topic of trade, saying it would continue to stay important and that trade between the two countries was complimentary. “There are things that you have and there are things that we have, and then we in fact complement each other. And I find that the area of trade during this decade is also going to be tremendously important,” he said.

Modi, during his remarks, said both countries were committed to democratic values and traditions. “I find that importance of these traditions will only increase further,” he said.

There were lighthearted moments as well. Biden told Modi that the seat the prime minister was sitting on is used almost daily by an Indian-American (Vice-President Kamala Harris). Biden talked about Harris’ mother being from India, adding that she was a “remarkable” woman.

The President said he had been contacted by a Biden from Mumbai and was not able to follow up whether they were related. On a visit to India, somebody informed him that there were five Bidens in the country, he said, mentioning a Captain George Biden of the East India Tea Company.

“That’s hard for an Irishman to admit. I shouldn’t be so casual,” Biden said looking, partly at the press, and said he hoped his humor was being understood.

The prime minister later said, to laughter, that he had brought along some genealogy papers for Biden to take a look.

Modi also said this decade will be shaped by talent and people-to-people linkages. “I am glad the Indian Diaspora is making an active contribution towards the US’s progress.” He said that technology is becoming a driving force. Modi later described bilateral summit with Biden as "important" as they are meeting at the start of the third decade of this century.

He encouraged them to step up their investments by highlighting the vast opportunities in India.