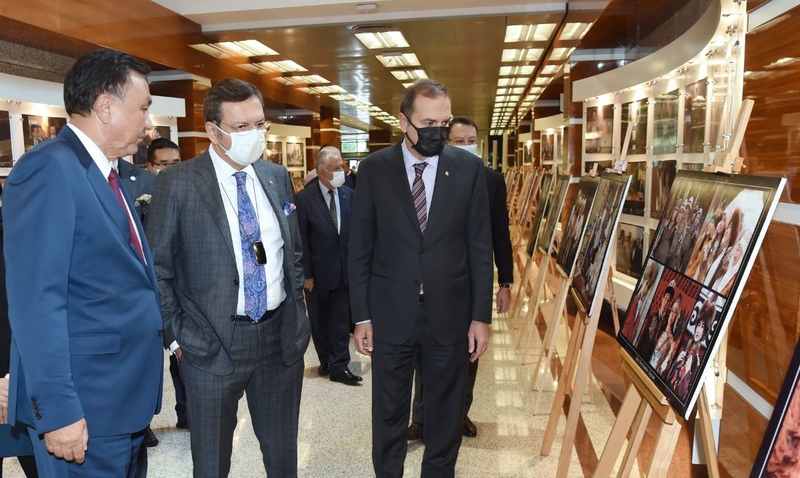 AKIPRESS.COM - In honor of the 30th anniversary of Independence of the Kyrgyz Republic, on September 30, 2021, the opening ceremony of a photo exhibition was held at the building of the Union of Chambers and Exchanges of Turkey (TOBB), organized by the Embassy of the Kyrgyz Republic in Turkey jointly with TO??.

The photo exhibition was opened by Ambassador H.E. Kubanychbek Omuraliev and the President of TOBB Mr. Rifat Hisarciklioglu, in which the heads of regional TOBB, members of the Union-representatives of the business community, TOBB employees and media representatives took part.

The exhibition featured 60 photo-paintings depicting historical sights, landscapes of the country, national sports that reflect the ancient history, rich culture, picturesque nature and traditional life of Kyrgyzstan, as well as compositions from the Manas epic.

In his speech, Ambassador Omuraliev briefly informed about promising areas for investment in Kyrgyzstan and the possibility of duty-free export of 6,200 and 3,200 products under the GSP + and GSP programs to the EU and US markets, respectively, as well as urged the Turkish business community to invest in our country.

Mr. Rifat Hisarciklioglu thanked H.E. Mr. Kubanychbek Omuraliev for organizing the exhibition in the Center of the Turkish business community and noted the contribution of Turkish businessmen to the development of Kyrgyzstan.

The photo exhibition is a continuation of a series of exhibitions demonstrated over the past three months at various venues. The exhibition lasts until October 5, 2021.