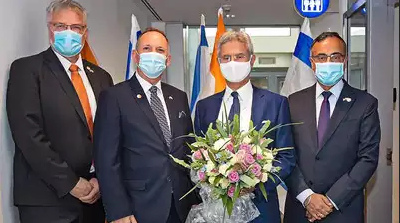 AKIPRESS.COM - Israel wants India, with its transformed relationship with the Arab world, to play a greater role in the Middle East’s emerging strategic landscape, The Times of India reported.

On the eve of Indian foreign minister S Jaishankar’s visit to Tel Aviv, Israel’s foreign secretary Alon Ushpiz told Indian media in an exclusive chat, “We want very much to look into, how can the new situation in the Middle East have an Indian angle to it? How can we incorporate India into the opportunities that are emerging? Normally this region is flooded with threats and challenges. But in the last year, I have seen the dramatically changed landscape in the Middle East because of the Abraham Accords. This is really a strategic earthquake.”

The signals from this visit will, therefore, be a pointer to the future of one of India’s closest international relationships.

Therefore, Jaishankar’s discussions with his counterpart Yair Lapid discussions will be significant. Interestingly, Ushpiz said, while no one in the Quad (a grouping of Australia, India, Japan and the US) had approached Israel, they would like to engage with “anyone” on the bloc’s focus areas of vaccines, emerging technology, climate change and security.

“We will be happy to join any conversation in these areas. I will be very happy to deepen our cooperation with India on all these issues. But... no one from the Quad has knocked on our doors,” he said.

The next frontiers of the bilateral relationship, Ushpiz said, lies in Big Data, technology, healthcare and communications.

“There are new frontiers when it comes to technology that we don’t have the luxury of missing. Artificial intelligence (AI), quantum computing, Big Data — all these things that can be part of our security cooperation and economic prosperity, but also provide security and stability to our people,” Ushpiz said.

“We have to be very strict, keep our eyes on the ball when it comes to new fields of technology. There is no doubt in my mind that technology can easily decide the economic fate of nations,” he added.

Iran will remain a challenging spot for both countries.

Unfortunately, in their minds, in the minds of the Iranians, they do not see the robust and stern reaction from the International community.”

India, on the other hand, is doubling down on Iran, particularly in the context of the fresh security challenges emerging from the Afghanistan situation.

Indian foreign minister S Jaishankar on Sunday began his five-day visit to Israel by laying wreath at a cemetery for Indian soldiers who laid down their lives in the region during the World War I in Talpiot, Jerusalem.

The heroics of the Indian soldiers have prominently come to light here during the past two decades and the story of liberation of the northern coastal city of Haifa, in what most war historians consider "the last great cavalry campaign in history", has become a household tale with its inclusion in the city's local history textbooks.