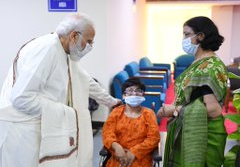 
Three-quarters of adults in the country of 1.3 billion people have had one shot, and around 30% are fully vaccinated, the government said.

India has achieved this mark of one billion vaccine doses in less than 40 weeks.

The authorities say that this exemplifies India’s prowess in various elements in the vaccination journey – development of new vaccines, production of vaccines, deployment, and technology.

India’s COVID-19 vaccination drive was launched on 16 January 2021, some three weeks after vaccination in the EU started on 27 December 2020.

In the spring, the surge of the highly infectious Indian variant of the coronavirus saw hospitals run out of beds and oxygen, leaving morgues and crematoriums overflowing.

This mission was the force behind the world’s first DNA-based COVID vaccine Zycov-D, developed by Zydus Cadila, targeted at vaccinating children over 12 years.

India is the only country that has developed multiple vaccines across multiple platforms (Bharat Biotech’s COVAXIN uses an inactivated virus platform, Zycov-D is a DNA vaccine, Covishield a viral vector vaccine, Gennova is in the running for being India’s first mRNA vaccine), according to its government.

For vaccine deployment and delivery, a comprehensive system of planning and implementation was put in place.

The National COVID Vaccination Program initially targeted the healthcare and frontline workers and senior citizens, due to a higher risk perception.

Subsequently, the program was rolled out to include people above 45 years of age and with co-morbidities and was later extended to all citizens above 45.

All adults above 18 are included in the ongoing phase, and vaccination is being provided for free at public vaccination facilities.

Local production booms Following the Drugs Controller General of India (DCGI) approval, three vaccines have been utilized in the Program (COVISHIELD developed by Serum Institute of India in collaboration with Astra Zeneca of the United Kingdom COVAXIN of Bharat Biotech International Limited and SPUTNIK V of Russia).

Nearly all of the 1 billion doses administered have been made in India, except for a minuscule proportion of Sputnik V (approximately 0.4 million doses).

Moreover, more than 95% of those vaccine doses have been delivered by India’s public health system, which the authorities say is a testimony to its reach and robustness.

Private healthcare outlets have also been included in the implementation of the vaccination drive.

By the end of 2021, India is looking at increased monthly production of COVID-19 vaccines, a larger basket of vaccine options and a bigger proportion of the population fully vaccinated. This, according to the authorities, would translate to a larger potential to share vaccines with the world, contributing toward the realization of the Indian Prime Minister Narendra Modi’s vision of “One Earth, One Health”.

Last June, on the occasion of the UK-hosted G7 meeting at which the leaders of India, Australia, South Korea and South Africa were invited as guests, Modi called for “one earth, one health” approach, which aims for unity and solidarity among the states of the world to deal with the COVID-19 pandemic.

He also emphasized the need to keep raw materials for vaccines easily accessible. According to experts, India can play a crucial role in delivering the urgently needed vaccines worldwide, given its extensive, well-developed existing infrastructure and supply chains.

Due to its sizeable generic drugs industry, India has been dubbed the pharmacy of the developing world.

“Today — October 21 — has been registered in history. The country has the protective shield of 100 crore (one billion) doses to protect us from a once in a century pandemic,” Indian Prime Minister Narendra Modi said in a tweet. President of Maldives, Prime Minister of Israel, Directors General of WHO & WTO have congratulated India for successful Covid-19 vaccination campaign.