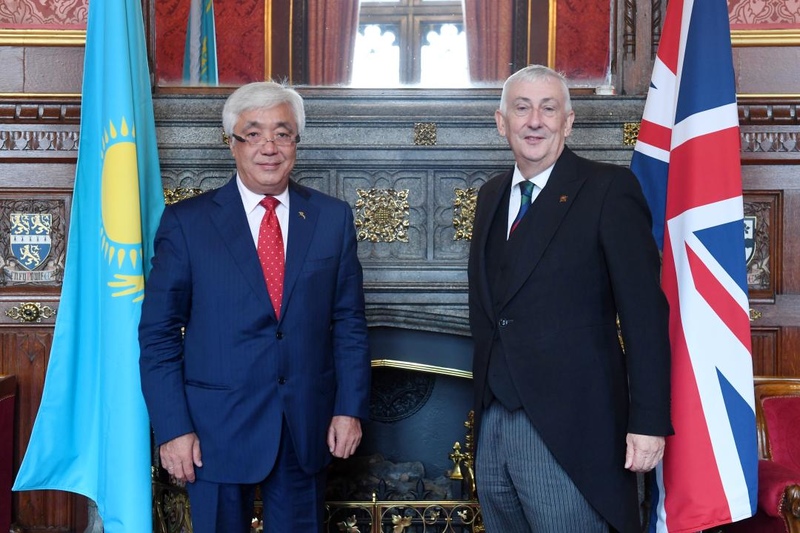 AKIPRESS.COM - Ambassador of Kazakhstan to the UK Erlan Idrissov met with the Speaker of the House of Commons of the UK Parliament Sir Lindsay Hoyle MP, the Kazakh foreign ministry said.

The sides discussed the current state of bilateral ties, including inter-parliamentary cooperation.

Ambassador Idrissov stressed that the UK was one of the first states to recognize Kazakhstan’s independence. Next January, the two countries will celebrate the 30th anniversary of diplomatic relations. Over these years, bilateral relations have reached the level of strategic partnership, while establishing effective instruments of Kazakh-UK cooperation.

Sir Lindsay welcomed the positive dynamics of cooperation between the two states in various fields. The sides discussed inter-parliamentary cooperation and highlighted the efficient work of the All-Party Parliamentary Group for Kazakhstan. The sides also agreed to continue work on organizing mutual visits of parliamentary delegations in 2022.

The Kazakh Ambassador spoke in detail about the Astana International Financial Centre (AIFC), which operates based on the principles of English common law. Over a short period of time, the AIFC has become an important and attractive platform for investors and now houses more than 100 foreign companies.

The sides also talked about a number of important upcoming events which will support the partnership between the two states. Of particular significance are the Kazakh delegation’s participation in the UN Climate Change Conference in Glasgow, Scotland, an investment forum at the London Stock Exchange with the participation of Samruk Kazyna Sovereign Wealth Fund, the AIFC, and Kazakhstan’s Ministry of Energy, as well as the UK delegation’s visit to Kazakhstan on 3-5 November to participate in the annual meeting of the Kazakhstan-UK Intergovernmental Commission on Trade, Economic, Scientific, Technical and Cultural Cooperation. The UK delegation will be headed by the Minister of State for International Trade Ranil Jayawardena MP.

A separate topic was the facilitation of the UK’s visa regime for Kazakh citizens with the aim of expanding economic ties and increasing the tourist flow.