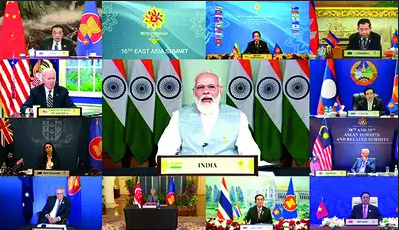 The Summit was chaired by His Majesty Sultan Haji Hassanal Bolkiah, Sultan and Yang Di-Pertuan of Brunei Darussalam.

While reiterating the principle of Asean centrality in the region in his virtual address, PM Modi said, "India remains committed to strengthening respect for shared values of multilateralism, rules-based international order, international law and sovereignty, and territorial integrity of all nations.

He underlined the significance of a free, open and inclusive Indo-Pacific. Modi emphasized on the importance of a resilient global value chain and also reiterated India's commitment to deliver Quad-sponsored vaccines to Indo-Pacific countries.

"He recalled India’s support of $1 million to Asean Covid-19 Recovery Fund and raised the idea of developing global standards on cyber security”.

"Modi reaffirmed the importance of EAS as the premier leaders-led forum in Indo-Pacific, bringing together nations to discuss important strategic issues. PM Modi highlighted India’s efforts to fight the Covid-19 pandemic through vaccines and medical supplies.

He called for a better balance between economy and ecology and climate sustainable lifestyle. Modi reaffirmed "ASEAN centrality” in the Indo-Pacific and highlighted the synergies between ASEAN Outlook on Indo-Pacific (AOIP) and India’s Indo-Pacific Oceans Initiative (IPOI)".

The summit saw participation by a US President for the first time since 2017 with President Joe Biden reiterating the US commitment to the international rules-based order and expressing concern over threats to that order.

Both leaders were also said to have expressed concerns over the situation in Taiwan Strait.

Chinese Premier Li Keqiang in his virtual address at the summit said that South China Sea is our common home. Maintaining peace, stability and the freedom of navigation and overflight in the South China Sea serves the common interests of all parties.

He added that there has never been a problem with the freedom of navigation and overflight in the region.

The 16th East Asia Summit saw the participation of leaders from ASEAN countries and other EAS countries including Australia, China, India, Japan, Russia, South Korea, and the USA.