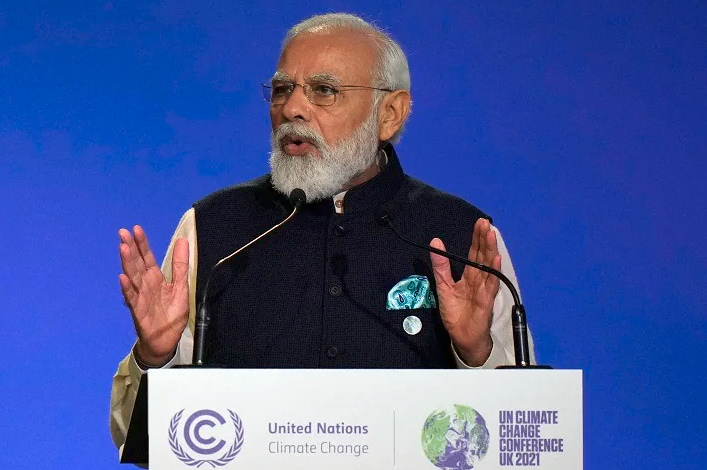 AKIPRESS.COM - Indian Prime Minister Narendra Modi at the COP26 Summit underway in Glasgow asserted that India is committed to achieving complete net-zero carbon emission by 2070 and significantly reducing the use of fossil fuel and increasing renewable energy use by 2030, ABP reported.

The announcement injected new life into COP26 talks. Though India's goal is two decades behind rich nations such as the U.S. and U.K., it's compatible with what scientists say is needed to avoid catastrophic global warming.

"This was a very significant moment for the summit," said Nicholas Stern, chairman of the Grantham Research Institute on Climate Change and the Environment at the London School of Economics. It's a chance for India to show that "it can deliver on both economic development and climate change."

U.K. Prime Minister Boris Johnson kicked off the COP26 summit on Monday by urging world leaders to "defuse the bomb of climate change."

With helicopters buzzing overhead, delegates swarmed through the vast conference center along the banks of the river Clyde and long lines formed as organizers struggled to accommodate the crowds.

PM Modi said India is the only country that is delivering in 'letter and spirit' on Paris Declaration commitments on tackling climate change.

The Prime Minister said it is need of hour to put pressure on those countries that have failed to deliver on their promises about climate finance.

“India will reduce carbon intensity by 45 percent,” he added addressing the COP26 Summit in Glasgow Modi further said, like in India, the climate is a big challenge for the agriculture sector for most developing countries. He said, from sources of drinking water to affordable housing, all need to be made resilient against climate change.

He also raised the Nationally Determined Contribution (NDC) of achieving 450-gigawatt non-fossil energy capacity to 500 gigawatts. “India will increase its non-fossil energy capacity to 500 gigawatts by 2030; India will fulfill 50 per cent of its energy requirements from renewable energy sources by 2030. Between now and 2030, India will reduce its total projected carbon emissions by 1 billion tons, and by 2030, India will reduce the carbon intensity of its economy by 45 per cent and India will achieve the target of net zero by 2070,” the prime minister said.

“These five elixirs will be an unprecedented contribution by India towards climate action,” he added.

Prime Minister stressed the need to include climate change adaptation policies in the school syllabus to make next-generation aware of the issues. He also called for lifestyle changes that can go a long way in dealing with climate change and urged to make 'Lifestyle for Environment' a global mission.

“It is necessary that all of us come together as a collective partnership and take 'lifestyle for environment' forward as a movement. It can become a mass movement for an environmentally conscious lifestyle. Instead of mindless and destructive consumption, we need mindful and deliberate utilisation. This movement can help us achieve goals that can bring about a revolutionary change in diverse areas like fishing, agriculture, wellness, dietary choices, packaging, tourism, clothing, water management and energy, he said.

Prime Minister Modi reiterated that developed nations must fulfill the promised USD 1 trillion as climate finance, saying this should be tracked the same way as climate mitigation.

“India expects developed countries to make USD 1 trillion available as climate finance as soon as possible. As we track the progress of climate mitigation, we must also track climate finance. Justice would truly be served if pressure is put on those countries that have not lived up to their climate finance commitments,“ he said.

He added it is an injustice to those developing nations that are more impacted by climate change. “India also understands and shares the pain of other developing countries and has continuously been vocal about their expectations. For many developing countries climate change is a very big crisis looming before them, one that threatens their very existence. Today to save the world we have to take big steps. It is the need of the hour, he said.

PM Modi stated that “it was not India that was making promises, it was promises that 1.25 billion Indians were making to themselves and I am pleased that a developing country like India that is working on lifting millions of people out of poverty, working day and night to ensure ease of living for millions of people and the India that represents 17 per cent of the world's population but is responsible for only five per cent of global emissions, is that country which has spared no efforts in fulfilling its duty,“ Modi said, emphasising that India's contribution in climate change mitigation far outstrips its role in emissions.

The Paris Agreement is a legally binding international treaty on climate change. It was adopted by 196 Parties at COP 21 in Paris, in December 2015.

Elaborating on India's track record, the prime minister said that in terms of installed renewable energy capacity, India is ranked 4th in the world, and in the last seven years, India has increased its non-fossil fuel energy by 25 per cent which now represents 40 per cent of its energy mix.

“More people travel on the Indian Railways every year than the entire population of the world. This huge railway system has committed to attain net-zero emission by 2030. This initiative alone will reduce carbon emissions by 60 million tons annually.

“LED Bulbs campaign is reducing emissions by 40 million tons annually. Today, India is working on many such initiatives with a firm will. At the same time, with a view to collaborating with the world, it has also offered international solutions and revolutionary steps to promote solar power. We launched the International Solar Alliance initiative for climate adaptation and created the coalition for disaster resilient infrastructure (CDRI), which is an important and sensitive initiative and will help save millions of lives, he said.

PM Modi's statement at around 10 minutes was longer than allocated to world leaders. He also expressed his apology to the chair for overshooting the time limit, but highlighted that it reflected India's firm commitment climate talks.