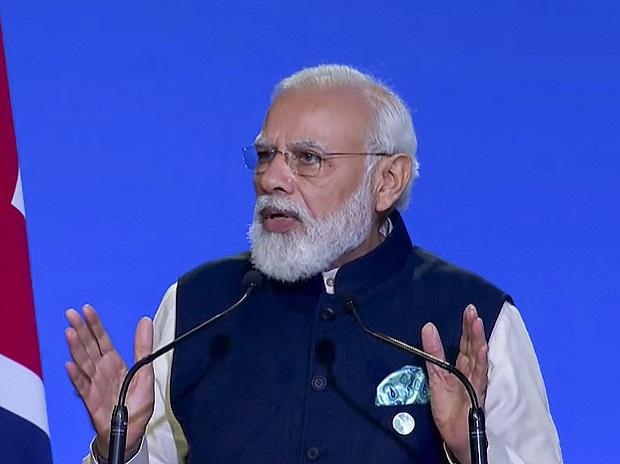 AKIPRESS.COM - Emphasizing that everything is created from the Sun, Indian Prime Minister Narendra Modi on Tuesday called for One Sun, One World, One Grid' to improve the viability of solar power and announced that India's space agency ISRO will soon provide the world a calculator that can measure solar energy potential of any region across the globe, Business Standard reported.

Addressing world leaders at an event “Accelerating Clean Technology Innovation and Deployment” on the sidelines of the COP26 climate summit in Glasgow, Modi said that fossil fuel powered many nations to become wealthy during the industrial revolution, but it made the earth and environment poor. The industrial revolution was powered by fossil fuels.

Several countries prospered by the use of fossil fuels but it  also left our Earth and environment poorer. The race for fossil fuels also created geopolitical tensions. However, today, technology has presented us with a better alternative, he said.

Citing the 'Suryopanishad' during his address, Modi said that everything was born from the Sun, Sun is the only source of energy and solar energy can take care of everyone.

"In India, it has been mentioned in the ancient text, in the Suryopanishad, that everything is created from the Sun, the source of all energy is the Sun and it is the energy from the Sun that nurtures all. Ever since there has been life on earth, the life cycle of all living beings, the daily routine has been linked with the rising and setting of the Sun, he said.

Modi said that till the time this connection with nature was maintained, the planet stayed protected and healthy.

"However, in modern times and in the eagerness to race ahead, man disturbed the balance of nature and caused great harm to the environment. If we want to re-establish a life in balance with nature, the path to this life can only be lit by our Sun. In order to protect the future of mankind, we must go together with the Sun, he said.

Calling for 'One Sun, One World, One Grid', Modi said it was the solution to tackle the challenge of solar power available only during the day. In one hour, the earth's atmosphere receives enough sunlight to power the electricity needed by every human being on earth for a year. This  unlimited energy is completely clean and sustainable. The only challenge is that solar energy is only available during the day and is dependent on weather conditions.

One Sun, One World, One Grid is a solution for this very challenge. A worldwide grid will enable us to provide clean energy everywhere at all  times. It will also reduce the need for storage and increase the viability of solar projects. It will not only reduce carbon footprint and cost of energy, but open up new avenues for cooperation between different regions and different countries.

I am confident that the harmonization between 'One Sun, One world, One Grid' and the Green Grid Initiative (GGI) will help in developing a joint and robust global grid, the prime minister said.

He also announced that the Indian Space Research Organization (ISRO) will soon launch an application to calculate solar power potential of any place on earth. I would also like to share that our space agency ISRO is soon going to present the world with a solar calculator application.

Using this calculator based on satellite data, the solar power potential of any place on earth can be measured. This application will be useful in deciding locations for solar projects and strengthen One Sun, One World, One Grid, he said.

During the event, British Prime Minister Boris Johnson praised Modi, saying he is among those who understands very well how to tackle climate change.