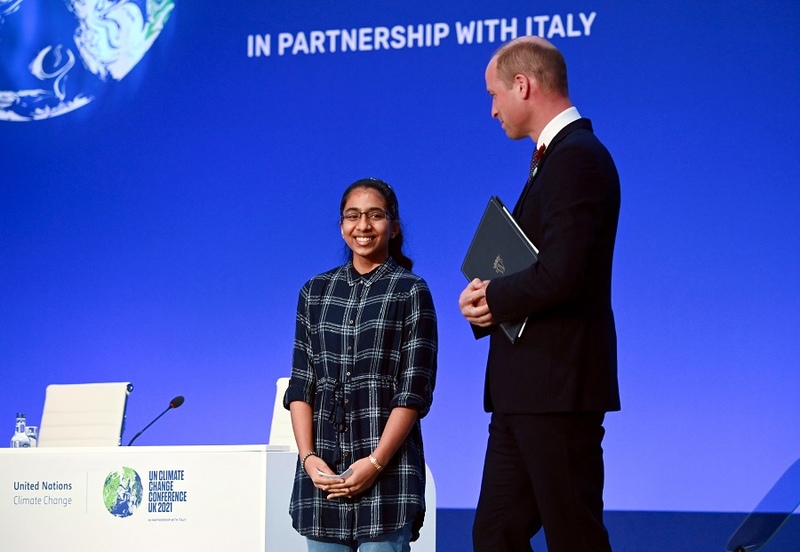 AKIPRESS.COM - Recognizing climate change as an existential threat to humanity, an optimistic schoolgirl from the southern state of Tamil Nadu in India has impressed world leaders with an impressive address at the ongoing UN Climate Change conference (COP26) in Glasgow, saying she's not just from India but from Earth, The Indian Express reported.

Vinisha Umashankar, a 15-year-old schoolgirl was part of the “Accelerating Clean Technology Innovation and Deployment”, attended by Prime Minister Narendra Modi at COP26 summit in Glasgow on November 2.

Umashankar, whose solar-powered ironing cart project was the finalist of Prince William's inaugural Earthshot Prize, amidst the presence of heads of state and government delegations, said: "I'm not just a girl from India. I'm a girl from earth and I'm proud to be so."

"I'm also a student, innovator, environmentalist and entrepreneur but most importantly, I'm an optimist," she said emphatically in her brief address that got a rousing applause from the audience, comprising Prime Minister Narendra Modi and UK’s Prince William, who stood on stage and proudly listened to her speech.

She invited world leaders, international organisations, civil society, and business leaders to stand with her generation and back the innovations, solutions and projects working to repair the planet and join the next generation in taking action.

“We, the Earthshot Prize Winners and finalists, are proof that the greatest challenge in the history of our Earth is also the greatest opportunity. We lead the greatest wave of innovation humanity has ever known,” said Umashankar.

“We chose not to complain, but take actions that will make us wealthier and healthier. We chose to do these things, not because they are easy, but because they are hard. Rising to these challenges will shape a new generation. A generation that will build a better world for all of us and generations to come,” she said.

“We won’t wait for you to act. We will lead even if you don’t. We’ll build the future, even if you are stuck in the past. Please accept my invite. I assure you won’t regret it,” she added.

Umashankar had made the shortlist cut of the 1 million pounds Earthshot Prize within the “Clean Our Air” category with her concept of a solar-powered clean alternative to the charcoal-powered street irons that press clothes for millions of Indians each day.

Prince William later posted a message of appreciation for Umashankar, saying how proud he was to see her speak on the global platform, demanding change so that her generation can have a better future.

Attending the leaders' event 'Accelerating Clean Technology Innovation and Deployment', Prince William delivered a speech on November 2 in which he showcased the prize winners and finalists and solutions to the world's greatest environmental challenges.

“Our Finalists are bursting with energy, ideas and ambition, so please expect many of them to come knocking on your doors! Their ingenuity is amazing. Their potential is off the charts. It’s my pleasure to introduce you to the real superstars in this room today,” Prince William said in his address to the summit.

Prince William, the Duke of Cambridge, joined the winners and finalists at the World Leaders’ Summit, hosted by UK Prime Minister Boris Johnson where Heads of State and Government leaders assembled on November 1-2 to deliver national plans to tackle climate change.

Earlier, Vinisha joined the Indian winner in the category, Vidyut Mohan, for a meeting with Prime Minister Modi.

“It was such an honour meeting the Prime Minister, who was very curious about my winning agricultural waste recycling project and had some very encouraging words about scaling this up to help farmers all over India,” said Mohan, the co-founder of Takachar – which was named the winner of 1 million pounds prize last month for its cheap, small-scale, portable technology that converts crop residues into sellable bio-products.

Also, on display were solutions from Bangladesh-based Finalist SOLbazaar who showcased the technology behind the world's first peer-to-peer energy exchange network, and Reeddi Capsules for their solar-powered energy capsule which is transforming clean energy across Nigeria.

Following the event, winners and finalists met leaders and government representatives from their respective countries.

This was the first time the finalists met with some of the Global Alliance, an unprecedented network of philanthropists, NGOs and some of the world’s biggest companies and brands representing 3.6 million employees globally that together will help support and scale the innovative and ground-breaking solutions developed by all 15 finalists.

On Wednesday, the winners participated in an interactive event for local Scottish school students, to be interviewed by young climate champions representing Generation Earthshot – an educational initiative at the COP26 climate summit.

With the conclusion of the World Leaders’ Summit segment of the 26th Conference of Parties (COP26) at the United Nations Framework Convention on Climate Change (UNFCCC), the focus now shifts to the nearly 200 countries’ negotiating teams to thrash out a global agreement by the end of the summit on November 12.