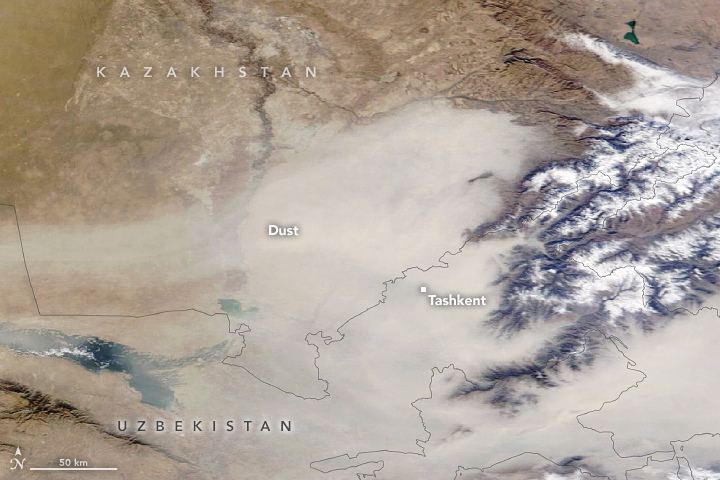 AKIPRESS.COM - Image of the Day from NASA Earth Observatory shows a thick blanket of dust over Tashkent, Uzbekistan. The unusual dust storm was triggered by an anticyclonic storm with wind speeds of up to 55 miles per hour, Earth.com reported.

According to NASA, some of the dust appeared to come from parched farmland, pastures, and grasslands to the northeast in Turkistan region of Kazakhstan.

Uzbekistan’s weather agency, Uzhydromet, reported that levels of particulate matter (PM10) pollution rose to 18,000 micrograms per cubic meter. The dust concentrations periodically reached a level that is 30 times what is considered safe.

In 150 years of record-keeping, these are the most extreme dust conditions that have never been observed in Tashkent, according to Uzhydromet.

“If the measurements are correct, those are truly extreme and extremely hazardous levels of particulate matter for an urban area,” said Thomas Gill, an atmospheric scientist at the University of Texas at El Paso. “The U.S. EPA’s 24-hour average limit is, for example, 150 micrograms per cubic meter for PM10.”

“The highest hourly concentrations I have ever seen recorded in El Paso, Texas – arguably the dustiest city in the U.S.- are about 5000 micrograms per cubic meter for PM10.”

“So these levels in Uzbekistan are about four times worse than I’ve ever seen in El Paso. These may be amongst the largest PM10 values ever measured for ambient air in an urban area.”

The image was captured on November 5, 2021 by the Moderate Resolution Imaging Spectroradiometer (MODIS) on NASA’s Terra satellite.