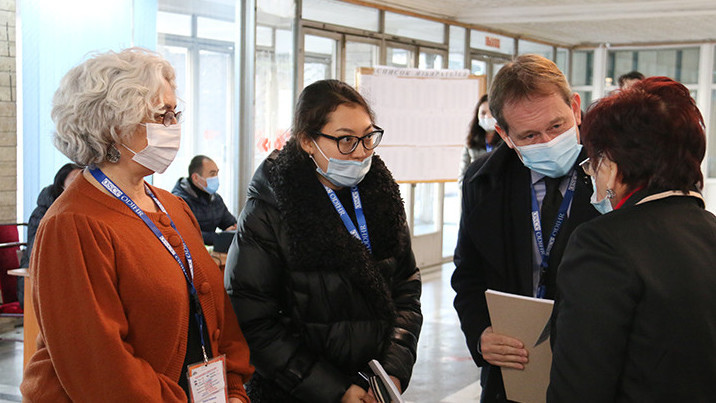 AKIPRESS.COM - Kyrgyzstan’s parliamentary elections were competitive, but they lacked meaningful voter engagement due to a stifled campaign, constitutional changes weakening parliament and extensive legislative changes to key aspects of the election. Generally adequate election legislation was undermined by limitations on civil and political rights as well as diminished separation of powers and the independence of the judiciary. Voters had a wide range of political options to choose from. Election preparations were handled efficiently by the election administration, and election day was peaceful, international observers said in a statement today.

The joint observation mission from the OSCE Office for Democratic Institutions and Human Rights (ODIHR), the OSCE Parliamentary Assembly (OSCE PA), and the Parliamentary Assembly of the Council of Europe (PACE), noted that the elections took place against the backdrop of an extensive legislative review by a parliament whose mandate had expired. The authorities displayed the political will to ensure clean elections, but strict enforcement of subsequent measures led to a cautious campaign.

“The past year has been dizzying for Kyrgyzstan, with massive political shifts and a rush to centralize power,” said Peter Juel-Jensen, Special Co-ordinator and leader of the short-term OSCE observer mission. “While overall well run and competitive, yesterday's elections reflected this rushed approach. To fully meet international commitments, much greater care will need to be paid in the future to standard democratic processes including appropriate checks and balances on power.”

The extensive amendments to the legal framework shortly before elections were called did not grant voters or election officials an opportunity to familiarise themselves with the new system. At the same time, the way in which the legal changes were introduced did not meet the standards of democratic law-making. Some 3.6 million voters were registered to cast their ballot, and turnout on election day was 35 per cent.

“These elections need to be seen against the backdrop of last year’s failed elections that led to a political system with sweeping powers for the president and the adoption of a whole new set of rules. The new constitution has altered the balance of power and drastically diminished the role of the parliament, while the low turnout yesterday seems to indicate a faltering public trust in the country’s institutions,” said Marina Berlinghieri, Head of the PACE delegation. “The people of this country deserve to have their freedoms respected, and we call on the newly elected parliamentarians to stand up for democratic standards, the rule of law and the protection of human rights.”

Election day was peaceful and procedures mostly followed. However, there were cases of ballot boxes not being properly sealed and overcrowding in some places. There were also unauthorised people present in a high number of polling stations, as well as external interference in a small number of cases. The presence of candidate observers in the overwhelming majority of polling stations helped to make the process more transparent. While the move to a mixed election system may have aimed to promote pluralism, it had a negative impact on the participation and representation of women across the country. Further there are no guarantees to maintain quotas aimed at ensuring greater participation of women, national minorities and people with disabilities.

Fundamental freedoms were generally respected in the campaign, which remained subdued. The new educational requirements that candidates have a higher education goes against international standards and significantly limits the number of citizens eligible to run. While the constitution guarantees freedom of expression and access to information, it also contains unduly broad and vague grounds that potentially limits freedom of expression. At the same time, a narrow definition of campaigning in the media and the decision of many media outlets not to cover the campaign, reduced coverage and left voters under-informed. Critical and analytical reporting was largely absent, with the exception of a few online media outlets.

“The recent reduction of the parliament’s power has caused the people to lose confidence in the impact of their vote, while undue restrictions placed on candidate eligibility and the move to a mixed electoral system have inhibited a more diverse range of choices,” said Farah Karimi, Head of the OSCE PA delegation. “Democracy is about representation and if women, young people and those who don’t have university diplomas are so severely limited in the right to run, we should not be surprised by the lack of voter enthusiasm.”

The change to a fully presidential system was initiated by the president, who since taking office earlier this year has significantly shaped the current political environment. As well as undue limitations on a number of civil and political rights, the constitution adopted in April gives the president a greater role in the appointment of judges and election officials, compromising the independence of the judiciary and the separation of powers.

“While voters had a range of political options, we are seriously concerned with the lack of engagement with voters and the efforts to inform them,” said Audrey Glover, who heads the ODIHR election observation mission. “We hope that the new parliament will now have the opportunity to make a proper assessment of all the legislative changes that have been made and work to improve them for the good of all citizens.”

The international election observation totalled 351 observers from 41 countries, made up of 283 ODIHR experts and long- and short-term observers, 55 parliamentarians and staff from the OSCE PA, and 13 from PACE.