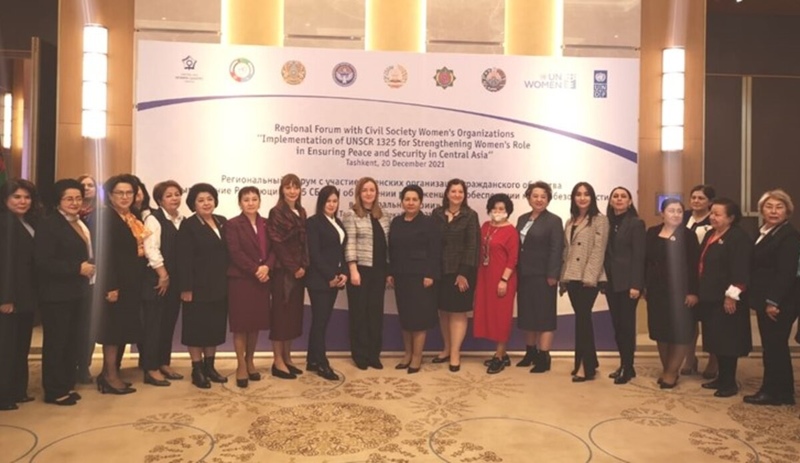 AKIPRESS.COM - The United Nations Regional Centre for Preventive Diplomacy for Central Asia, the Senate of the Republic of Uzbekistan and UN Women Regional Office for Europe and Central Asia organized a Regional Forum on the implementation of the UN Security Council Resolution 1325 in Central Asia with the participation of civil society women’s organizations from across the region on December 20. The event was organized within the framework of the Central Asia Women Leaders’ Caucus launched in 2020 with the support of UNRCCA and UNDP, to boost political, economic and social participation of women in Central Asia.

Addressing the Forum, the Special Representative of the Secretary-General for Central Asia and Head of the UNRCCA, Natalia Gherman, underlined the vital importance of inclusive cooperation between the different actors active in the field of WPS in the region, from civil society to policy makers to members of regional and international communities, to ensure sustainable progress in the implementation of the UNSCR 1325 pillars – participation, prevention, protection as well as relief and recovery.

Attended by the founders of the Central Asia Women Leaders’ Caucus, representatives of international organizations and leaders of the women’s civil society organizations from all five Central Asian States, the Forum aimed to consolidate effort of different actors on implementation of the Women, Peace and Security Agenda and contribute to development of the regional approach to issues pertaining to participation of women in peacebuilding processes. It was also intended to determine major areas for co-operation between CAWLC and civil society in the domain of Women, Peace and Security for the next period.

The Chairperson of the Parliament of the Republic of Uzbekistan, and Chairperson of the CAWLC in 2021, Tanzila Narbaeva, emphasized the unique positioning of the platform to further various gender related priorities in the regional political arena. In particular, she reiterated the CAWLC commitment to “continue its efforts to implement the Women, Peace and Security agenda at the regional and local levels towards strengthening the peace, security and prosperity of all countries in the region”.

During interactive group discussions, participants focused their deliberations on lessons learnt and best practices, as well as on formulating tangible and actionable recommendations for systematic close collaboration with the CAWLC at the regional level aimed at supporting the ongoing engagements at the local level.

Concluding the event, SRSG Gherman commended the recommendations presented by the participants directed at: increasing women’s participation and representation; youth-related work; prevention of violence; adoption and financing of national action plans on UNSCR 1325; enhancing women’s role in countering global threats such as terrorism and violent extremism as well as climate change. “These suggested directions of action are fully aligned with the UN priorities, as articulated by the Secretary-General in his reports on the Women, Peace and Security agenda as well as his recent Our Common Agenda report”, SRSG Gherman noted.