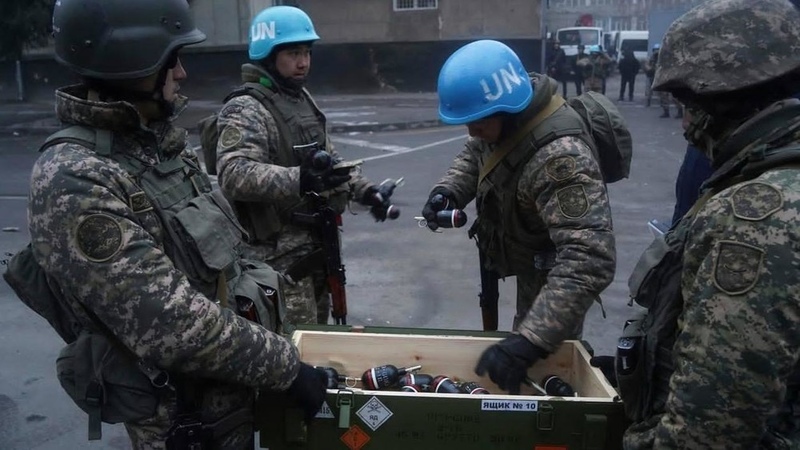 "We have conveyed our concern to the Permanent Mission of Kazakhstan directly on this issue, and we've received assurances from them that this issue had been addressed," UN spokesman Stephane Dujarric told reporters.

He added: "Any UN troop and police-contributing countries are to use UN insignia only when they are performing their mandated tasks as UN peacekeepers in the context of their deployment within a UN peacekeeping operation, as mandated by the UN Security Council."

Kazakhstan issued an awkward statement in response, saying the helmets were the only part of UN gear worn by its soldiers.

"During the violent riots in Almaty, the Peacekeeping Unit of the Ministry of Defense of Kazakhstan (Kazbat) was put on high alert to assist and protect strategic infrastructure facilities of the city from the terrorists and extremists," Kazakhstan's mission to the UN said in a statement on Twitter.

"Except for the helmets that were worn as part of the official gear of local peacekeepers during the high threat, no 'UN' marked equipment was used."

Dozens of people were killed in clashes between protesters and government forces during historic violence in the Central Asian state last week in what authorities described as an attempted coup d'etat inspired by foreign forces.

Thousands were detained for questioning.