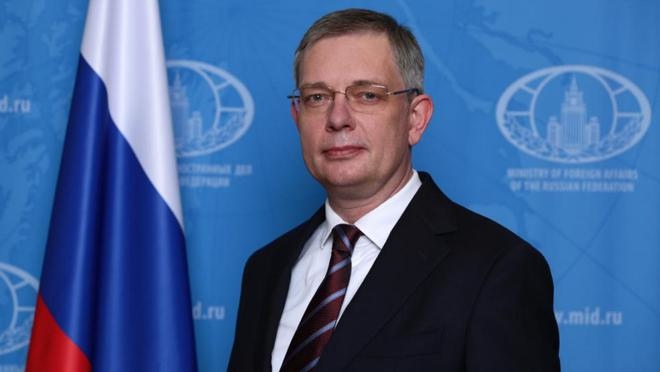 AKIPRESS.COM - The evacuation of some 4,000 Indians stranded in Kharkiv, Sumy and other conflict areas in eastern Ukraine has become Indian government’s top priority following the death of 21-year-old medical student Naveen Shekharappa Gyandagoudar on Tuesday. India has demanded safe passage for its citizens from both Russia and Ukraine, Hindustan Times reported.

Russia is putting in place “humanitarian corridors” for safe evacuation of Indians stranded in conflict zones in eastern Ukraine and will conduct an investigation into the death of an Indian student in Kharkiv, Russian ambassador-designate Denis Alipov said on Wednesday.

Offering his “deepest condolences” at the death of Gyandagoudar and conveying his sympathy to the student’s family and the Indian nation, he said: “Russia will do everything it possibly can to ensure the safety of Indian citizens in those areas of intense conflict actions and their evacuation, and do a proper investigation of this unfortunate accident.”

The Russian side is closely coordinating with India, both for the safety of stranded Indians and on the Ukraine crisis at the United Nations, he said. Russia has received Indian requests for emergency evacuation of Indians from conflict zones and authorities are working to “provide humanitarian corridors so that people have secure passage to safety on Russian territory”, he added.

Alipov thanked India for the country’s “unbiased” and “balanced” position at the UN during recent meetings on the situation in Ukraine. “We are strategic allies with India, we are very much grateful to India for its balanced position that has been displayed at the UN...We hope India will continue to demonstrate such an approach,” he said.

He said ongoing defence contracts and trade between India and Russia wouldn’t be affected by sanctions imposed by the US and its allies and partners as Moscow and Delhi have put in place “mechanisms” that are independent of Western financial mechanisms.

Amid concerns that the sanctions could affect the delivery of Russian hardware to India, Alipov emphatically said the supply of five regiments of S-400 air defence systems “will not be impacted in any way” by sanctions. The Russian side delivered the first regiment at the end of last year, coinciding with a visit to New Delhi by Russian President Vladimir Putin.

I don’t foresee any obstacles as regards the supplies of S-400 to India. We have the mechanisms and routes to continue with this deal [unobstructed]. The sanctions will not interfere in this deal in any way, whether previous sanctions or the newly imposed [ones],” he said.

“As regards the overall trade relations and economic cooperation, we will see what will be the ultimate impact of those severe restrictions that are being imposed,” he said.

Alipov said India and Russia have bilateral “mechanisms and means of doing business in national currencies”, though he acknowledged some concerns on the Indian side.

“Much will depend on the readiness of Indian partners to continue business because some of them are over-cautious as regards their exposure to the US and European markets. I hope their interest in the Russian market remains...As regards Russia, we are open to doing business with India and from our side, nothing has changed,” he said.

Alipov reiterated Russia’s stated position that it is not fighting the Ukrainian people or targeting civilian buildings and infrastructure or using prohibited weapons. He also accused the US of working towards “global dominance under the guise of democracy, freedom and the so-called rules-based international order”.