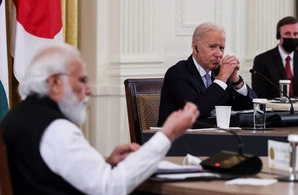 AKIPRESS.COM - The Quad leaders met on Thursday virtually to discuss the Ukraine crisis with the Indian Prime Minister Narendra Modi reiterating the importance of adhering to the UN Charter, international law and respect for sovereignty and territorial integrity, The Economic Times reported.

Developments in Ukraine were discussed in the meeting, including its humanitarian implications. Modi emphasised the need to return to a path of dialogue and diplomacy in keeping with India’s traditional approach on the issue.

This was reiteration of New Delhi’s position — of abstaining at UN votes on the Russia-Ukraine crisis, yet sending a message for respecting the sovereignty and territorial integrity of nations.

The war in Ukraine has had three of the four Quad partners -- Australia, Japan and the US.— criticising Russia while India has chosen to remain "neutral" and abstain during votes against the Kremlin at the UN.

A carefully crafted joint statement, devoid of the rhetoric from Washington, Canberra and Tokyo, said, “The Quad leaders discussed the ongoing conflict and humanitarian crisis in Ukraine and assessed its broader implications.”

Modi underlined that the Quad must remain focused on its core objective of promoting peace, stability and prosperity in the Indo-Pacific region. He called for concrete and practical forms of cooperation within the Quad, in areas like Humanitarian and Disaster Relief, debt sustainability, supply chains, clean energy, connectivity, and capacity-building.

“I met with my fellow Quad leaders Prime Minister Scott Morrison, Prime Minister Narendra Modi, and Prime Minister Kishida Fumio about Russia’s ongoing attack on Ukraine and our commitment to sovereignty and territorial integrity around the world, including in the Indo-Pacific,” US President Joe Biden tweeted following the Quad meet.

Leaders of the Quad grouping of countries -- Australia, India, Japan and the United States -- agreed on Thursday that what's happening to Ukraine should not be allowed to happen in the Indo-Pacific, Reuters reported quoting Japanese Prime Minister Fumio Kishida.

"We've agreed that unilateral changes to the status quo with force like this should not be allowed in the Indo-Pacific region," Kishida said, referring to Russia's actions in Ukraine.

"We've also agreed this development makes it even more important to work toward realising a free and open Indo-Pacific," Kishida told reporters.

“Today the Quad Leaders – Prime Minister Scott Morrison of Australia, Prime Minister Narendra Modi of India, Prime Minister Fumio Kishida of Japan, and President Joe Biden of the United States – convened to reaffirm their commitment to a free and open Indo-Pacific, in which the sovereignty and territorial integrity of all states is respected and countries are free from military, economic, and political coercion. They reaffirmed their dedication to the Quad as a mechanism to promote regional stability and prosperity,” according to a joint readout released after the virtual Summit.

“The Quad leaders discussed the ongoing conflict and humanitarian crisis in Ukraine and assessed its broader implications. They agreed to stand up a new humanitarian assistance and disaster relief mechanism which will enable the Quad to meet future humanitarian challenges in the Indo-Pacific and provide a channel for communication as they each address and respond to the crisis in Ukraine,” according to the joint readout.

“The meeting reviewed the progress on Quad initiatives since the September 2021 Quad Summit. The leaders agreed on accelerating cooperation, with an objective to achieve concrete outcomes by the summit in Japan later this year.”

The leaders also discussed other topical issues, including the situation in Southeast Asia, the Indian Ocean region and the Pacific Islands.

“In their continuing pursuit of a free and open Indo-Pacific, the Quad Leaders agreed to meet in person in Tokyo in the coming months,” it said — official confirmation of a Quad leaders’ summit in Tokyo in the first half of the year.