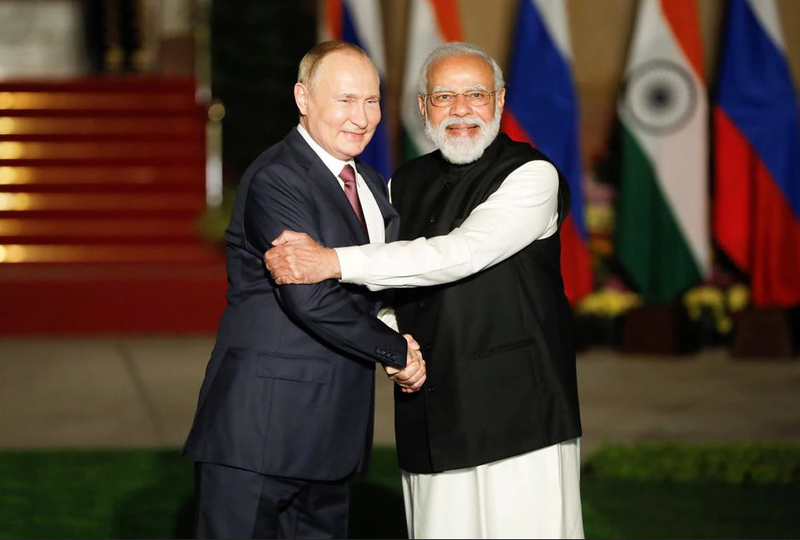 AKIPRESS.COM - Indian Prime Minister Narendra Modi on Monday sought the support of Russian President Vladimir Putin and Ukrainian President Volodymyr Zelenskyy for evacuating hundreds of Indians stranded in the war-torn city of Sumy while reiterating his call for a negotiated settlement to the Ukraine crisis, Mint reported.

During his telephone conversation with the Russian president, Modi suggested a “direct conversation" between Putin and Zelenskyy might “greatly assist the ongoing peace efforts", according to an official statement.

Putin briefed the Prime Minister about the ongoing measures related to "humanitarian corridors" for facilitating the evacuation of civilians including Indian students.

Earlier, Russian authorities said it would start a ceasefire on Monday and open "humanitarian corridors" in key Ukrainian cities including Kyiv, Kharkiv and Sumy. It was the third telephonic conversation between Modi and Putin after the military conflict began in Ukraine 11 days back.

The main focus of India’s evacuation efforts in Ukraine over the past few days has been the safe exit of some 700 Indians, mostly students, from the eastern city of Sumy.

More than 17,000 Indians have been brought back from Ukraine on evacuation flights, including those who were stranded in other conflict zones in the eastern part of the country that have seen heavy shelling and violence.

Modi spoke first to Zelenskyy on Monday and sought continued support from the Ukraine for efforts to evacuate Indians from Sumy. During the subsequent conversation with Putin, Modi stressed the importance of safe evacuation of Indians from Sumy at the earliest. Putin assured Modi of “all possible cooperation" for their evacuation.

PM Modi discussed the evolving situation in Ukraine with both leaders and appreciated the direct dialogue between Russia and Ukraine. Modi urged Putin to hold direct talks with Zelenskyy, in addition to the negotiations between their teams.

Modi also thanked Zelenskyy for the help extended by Ukraine in evacuating Indian nationals. During his conversation with Putin, he appreciated the announcement of a ceasefire and establishment of humanitarian corridors in parts of Ukraine, including Sumy.

Zelenskyy and Putin briefed Modi on the ongoing negotiations between Russia and Ukraine. The two sides held a third round of talks on Monday. It was the second telephonic conversation between Modi and Zelenskyy after the conflict began in Ukraine.

The phone call between Modi and Zelenskyy lasted about 35 minutes, while the conversation with Putin lasted about 50 minutes.

An official statement said Modi “expressed deep concern about the ongoing conflict and resultant humanitarian crisis" during the call with Zelenskyy. He reiterated his call for “immediate cessation of violence" and noted that India has “always stood for peaceful resolution of issues and direct dialogue between the two parties”.

He expressed “deep concern for safety and security of Indian students still remaining in Ukraine and emphasised the need for their quick and safe evacuation", the statement added.

A statement from the Russian Embassy in New Delhi quoted Putin as saying Russian military personnel are making every effort to ensure the evacuation of Indians from Sumy. The Russian statement further said Modi had “indicated his readiness to provide any possible assistance" to resolve the conflict as soon as possible.