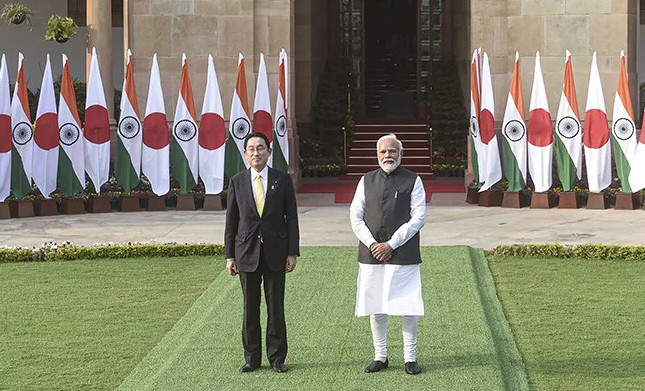 AKIPRESS.COM - Japan’s Prime Minister Kishida Fumio accompanied by a large delegation undertook an official visit to New Delhi from 19-20 March 2022 for the 14th India-Japan Annual Summit hosted by PM Modi. The Summit was the first meeting of the two leaders. India and Japan have multi-faceted cooperation within the ambit of their 'Special Strategic and Global Partnership’, NDTV reported.

PM Modi highlighted that the economic partnership between India and Japan are getting robust, adding that the two countries aim to reach an investment target of 5 trillion Japanese Yen ($ 42 billion) in the next five years.

The earlier target of 3.5 trillion Japanese Yen (JPY) under the 2014 Investment Promotion Partnership has already been met. The announcement that Japan will now invest 5 trillion Yen signals that Japanese companies and the government continue to see India as a viable investment destination. It also holds out the possibility for the second- and third-largest economies in Asia to effectively collaborate in the continent.

The two leaders issued a detailed joint press statement on a number of contemporary global issues including the ongoing conflict in Ukraine, maritime access in the Indo-Pacific region, especially the South China sea, and sustainable growth in the post-Covid world.

The two countries have also committed to cooperation on digital security and green technologies. On the strategic front, too, the joint statement and briefings by officials from both sides indicates forward movement: The statement condemned terror attacks on Indian soil and both countries reaffirmed their commitment to collaborate to ensure “peace and stability” in Afghanistan.

Spokesperson of India’s External Affairs Ministry said the agenda of the summit talks between PM Modi and PM Kishida included multifaceted bilateral ties as well as regional and global issues of mutual interest.

India’s foreign secretary, Harsh Vardhan Shringla, also confirmed that the two sides had discussed situation in Indo-Pacific. It is this goodwill, enhanced by Kishida’s visit, that can be built upon for greater cooperation in the upcoming 2+2, defence and foreign ministerial level, conference.

PM Kishida is travelling to Cambodia after concluding his India visit. The Japanese Prime Minister said he exchanged views on Indo-Pacific region and the situation in Ukraine with Modi.

At present, there are 1455 Japanese companies in India. Eleven Japan Industrial Townships (JIT) have been established. Japan is also India's 5th largest source of FDI, besides being the largest development partner.

This year also marks the 70th anniversary of the establishment of diplomatic relations between the two countries.The annual Indo-Japan summit could not be held in 2020 as well as in 2021 primarily due to the COVID-19 pandemic.