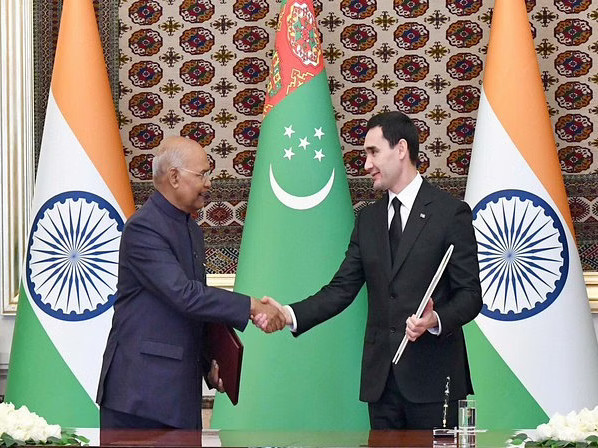 AKIPRESS.COM - India’s President Ram Nath Kovind visited Turkmenistan from April 1 to 3 and held discussions with his Turkmenistan counterpart Serdar Berdimuhamedov on Saturday where the two leaders agreed to intensify efforts to strengthen the multifaceted partnership between both countries, The Print reported.

Kovind called his visit to Turkmenistan, which is the first such visit by an Indian President, special since it coincides with the 30th anniversary of the establishment of diplomatic relations between India and Turkmenistan. This is also the first state visit hosted by the newly elected President of Turkmenistan.

Speaking on trade and economic cooperation, Kovind said that trade between India and Turkmenistan continues to be modest. Our business community and officials need to engage in more frequent and sector-specific interactions with each other to clarify business rules and regulations, document requirements, payment mechanisms etc, he said.

“India-Central Asia Business Council was established in 2020 under the India-Central Asia Dialogue framework to facilitate regional trade. It is important for our apex Chambers to pro-actively participate in this forum and provide suggestions for taking economic cooperation forward,” he added.

Noting that Turkmenistan is planning to further develop its oil and gas fields as well as diversify its petrochemicals sector, he said that India has made rapid technological advancements in all fields related to oil and gas. “The technical and technological capabilities of Indian companies in the downstream field could be utilized in further development of the petrochemical sector of Turkmenistan,” he added.

Stating that connectivity is critical for any trading arrangement, President Kovind said: "Towards this end, we highlighted the significance of the International North-South Transport Corridor (INSTC) and the Ashgabat Agreement on International Transport and Transit Corridor. I pointed out that the Chabahar port built by India in Iran could be used to improve trade between India and Central Asia."

The President also drew attention to another key area of discussion about the cooperation in energy as he said: "On the TAPI pipeline, I suggested that issues related to the security of the pipeline and key business principles may be addressed in Technical and Expert level meetings."

Speaking about the cooperation between India and Turkmenistan in the UN and other multilateral fora, the Indian President said that India counts on Turkmenistan’s support for its initiatives during India’s current membership at the UN Security Council for the term 2021-22.

Speaking on the regional issues, Kovind said that India stands for peace and stability as well as an inclusive government in Afghanistan and that any instability in Afghanistan is a threat to the whole region.

“Radicalization cannot be contained in a geographical region. The spread of radicalization, extremism and separatism would be a threat to regional and global security. Our collective approach has been articulated by UN Security Council Resolution 2,593 which demanded that Afghan territory not be used for sheltering, training, planning or financing terrorist acts,” he stated.

President Kovind also welcomed Turkmenistan's readiness to send a youth delegation to India within the ambit of India-Central Asia cultural cooperation. "The MoU on Youth Affairs signed today would further intensify exchanges between our youth," he said.

India and Turkmenistan also signed and exchanged four MoUs in the fields of disaster management, financial intelligence, culture and youth matters in the presence of the two Presidents.