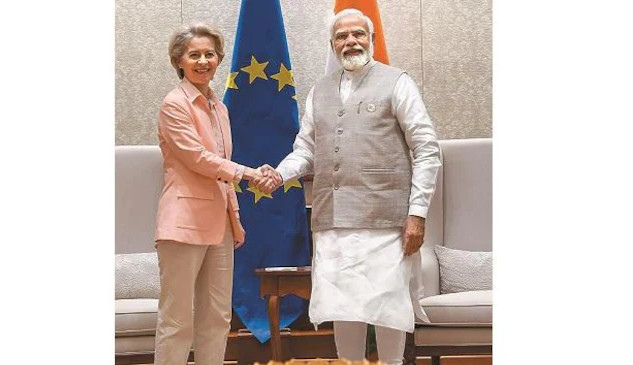 AKIPRESS.COM - European Union and India on Monday agreed to establish a Trade and Technology Council, a strategic mechanism to address the challenges of ensuring trusted technology and security in the wake of rapid geopolitical changes — a move that is expected to deepen their strategic relationship, Business Standard reported.

The decision to set up such a council will be the first for India with any of its partners and second for the EU, following the first one with the US.

“Both sides agreed that rapid changes in the geopolitical environment highlight the need for joint in-depth strategic engagement. The Trade and Technology Council will provide the political steer and the necessary structure to operationalise political decisions, coordinate technical work, and report to the political level to ensure implementation and follow-up in areas that are important for the sustainable progress of European and Indian economies,” said a joint statement.

The announcement comes in the backdrop of European Commission President Ursula von der Leyen’s two-day visit to tNew Delhi starting April 24. This was her visit to India in her current role.

The agreement on the launch of the council was reached at a meeting between Indian Prime Minister Narendra Modi and President of the European Commission on Monday morning.

“Strengthening the EU-India partnership is a key priority for this decade. We will step up cooperation in trade, technology, and security. This is why I’m pleased that PM Modi and I will establish an EU-India Trade and Technology Council,” she tweeted.

Both leaders also reviewed the progress of the trade talks, with India and the EU having restarted negotiations to strike a comprehensive free trade deal and an investment agreement.

“The EU and India are bound by decades of close partnership and are determined to increase joint efforts to tackle current challenges and address geopolitical circumstances,” added the joint statement.

The next round of trade talks between India and the EU are expected to take place in June, after the World Trade Organization’s 12th ministerial meeting. Earlier this month, a team of officials, led by Commerce Secretary B V R Subrahmanyam, was in Brussels to hammer out a framework for a trade agreement.

The meeting also took place amid ongoing conflict in Eastern Europe, with the Western nations trying to pressure India into condemning Russia for its military action in Ukraine. So far, India’s stance on the conflict has been neutral.

Separately, speaking at the inaugural session of the multilateral flagship conference on geopolitics and geoeconomics — Raisina Dialogue — von der Leyen said that the outcome of Russia - Ukraine conflict will not only determine Europe’s future, but also affect the Indo-Pacific region and the rest of the world.

We want a positive vision for a peaceful and prosperous Indo-Pacific region. The region is home to half of the world’s population and 60 per cent of global GDP,” she said.