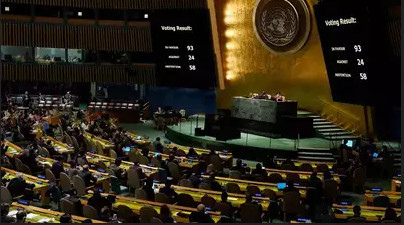 India at the United Nations General Assembly (UNGA) on Tuesday said a vocal minority of nay-sayers has held the entire process of UN Security Council (UNSC) reform hostage over the last four decades while calling for a more representative, credible and legitimate UNSC through the inclusion of more underrepresented voices.

UNGA was taking an action on the 'Resolution on standing mandate for GA meeting in case of use of Veto'. Explaining India's concern on the draft resolution informally called “veto initiative" aims to bring the requirement of a justification in case ‘veto power' is used in the UNSC, India's Deputy Permanent Representative to the UN called the resolution a 'piecemeal initiative'.

The draft was co-sponsored by dozens including the U.S. and the U.K. With it now adopted, any time one of the Security Council's five veto-wielding permanent members -- China, France, Russia, U.S. and U.K. -- use that power to block a resolution in the U.N.'s most powerful body, it will require a meeting of the General Assembly, where all U.N. members will be able to voice their views on the veto.

It is therefore ironical that the same set of Member States who argue vociferously against 'piecemeal reform' in the IGN (Intergovernmental Negotiations framework), are today themselves supporting a piecemeal initiative, which ignores the root cause of the problem," India’s representative said.

"We, therefore, hope that other piecemeal efforts focusing on aspects of category of membership and working methods of the Council would be treated without any double standards and with a similar yardstick in future," he added.

The Indian diplomat highlighted the above as the first of India's five concerns with the resolution. India also pointed out that "all five permanent members (of the UNSC) have used the veto over the last 75 years to achieve their respective political ends."

"The veto as a matter of principle should be abolished. However, as a matter of common justice, it should be extended to new permanent members so long as it continues to exist," the Indian representative said quoting the position of African nations at the IGN.

India also said that "the UNGA can do very little about it as effectively the P-5 have a veto over the veto." "Either all nations are treated equally in the context of voting rights or else the new permanent members must also be given the veto."

India also raised doubts about the efficacy of the resolution, saying that mechanisms are already in place enabling the members of the UNGA to convene on an "emergency basis" to discuss or even take action on issues that reach a stalemate in the UNSC.

"We regret the lack of inclusivity in the manner this resolution was put forth. We have serious concerns about such 'take it or leave it' initiatives which do not make a genuine effort to take into account the perspectives and concerns of the wider membership," the Indian diplomat said. "My delegation was therefore left with no option but to abstain on this Resolution," he said.

"The UNGA resolution was eventually adopted with consensus, without the conduct of the voting procedure"