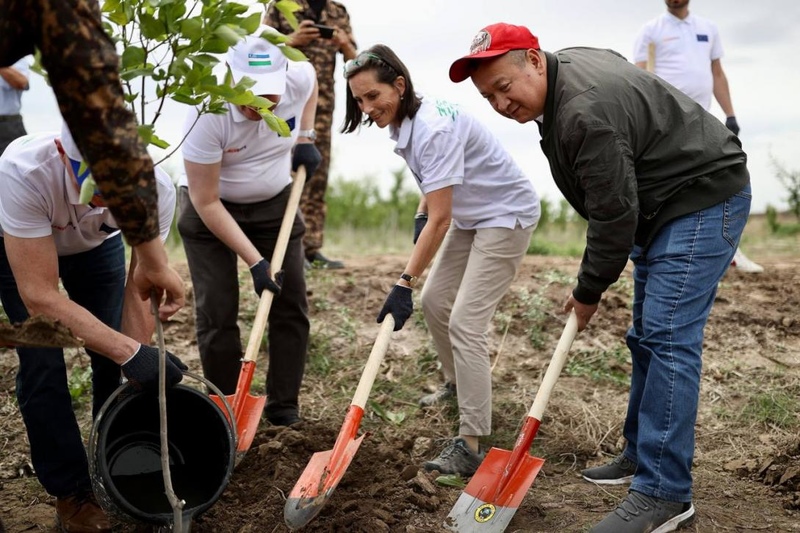 AKIPRESS.COM - A delegation of over 30 representatives of the European Union (EU), its member states and governmental institutions of Uzbekistan visited the Republic of Karakalpakstan and local project areas of the UN Multi-Partner Human Security Trust Fund as part of the EU’s commitment to support the Aral Sea region.

The drying up of the Aral Sea, which was the fourth largest lake in the world until the 1960s, is among the greatest human-made global environmental disasters whose negative effects go beyond national and regional boundaries. It has affected the livelihoods of millions of people living in the region, with the epicentre in the Republic of Karakalpakstan, in Uzbekistan.

An evolving crisis, the Aral Sea disaster has a number of negative consequences, including land degradation and desertification, shortage of drinking water, malnutrition, and deterioration of health conditions and the livelihoods of the local population. The socio-economic and environmental consequences are further complicated by the rapid speed of its negative effects.

The EU supports a number of initiatives in Uzbekistan aimed at rehabilitation of the disaster area. Among them is the Uzbekistan Government’s project “My Garden in the Aral Sea” intended to transform the Aralkum desert and neighbouring settlements in Karakalpakstan into a forest adapted to the climatic conditions of the region.

Within the visit, during the first day of the visit, in Muynak and at the “Cemetery of Ships”, the EU Ambassadors planted the first batch of the trees and installed a commemorative plaque marking the EU and its Member States’ contribution to the region’s green future.

“The disappearance of the Aral Sea is a tragedy that transcends national and international borders. Under the European Green Deal and the new EU Strategy for Central Asia, the European Union and its Member States stand ready to support Uzbekistan in every effort to reduce environmental degradation and boost resilience of affected populations. The EU has contributed over 5 million Euro to the UN Multi-Partner Human Security Trust Fund for the Aral Sea Region underscoring a high level of commitment to mitigate the negative consequences of the disaster. The EU, hereby, also undertakes to plant 27 000 trees by the end of this year, as a gift from 27 EU Member States to Uzbekistan, in support of the Uzbek Government’s attempt to claim back the land from the desert. We, thus, hope to pave the way for future green investments and the improvement of the ecosystem and sustainable life in the Aral Sea region,” said H.E. Charlotte Adriaen, Ambassador of the European Union to Uzbekistan.

In Karakalpakstan, the officials met with the representatives of Karakalpakstan Council of Ministers, Parliament, and the State University and visited the UN Multi-Partner Trust Fund’s water management and sustainable business projects that support the local communities and people, and discussed further mobilisation of investments. The delegates also visited the area’s abundant cultural heritage and natural sites.