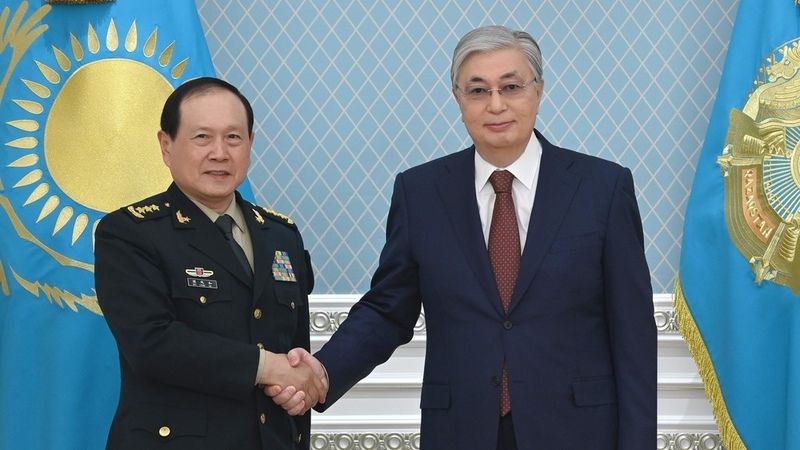 At a meeting with Wei in Nur-Sultan, Tokayev said Kazakhstan and China will celebrate the 30th anniversary of the establishment of diplomatic relations this year, and over the past three decades, the two countries have become permanent comprehensive strategic partners, maintained high-level coordination in the international political arena, and achieved remarkable results in cooperation in various areas.

Tokayev recalled that he has frequently interacted with Chinese President Xi Jinping in recent years, injecting strong impetus to the development of bilateral relations.

The Kazakh president said he believes that relations between the two countries will see greater breakthroughs and achievements.

Tokayev said Kazakhstan attaches great importance to the military cooperation with China and hopes that the two militaries will continue to strengthen practical cooperation in peacekeeping operations, joint exercises, personnel training, military technology and other fields.

Wei said that Tokayev, an old friend of the Chinese people, has made outstanding contributions to the establishment and development of China-Kazakhstan permanent comprehensive strategic partnership.

This year marks the 30th anniversary of the establishment of diplomatic ties between China and Kazakhstan, Wei said, adding that under the strategic guidance of the two heads of state, bilateral relations have maintained a momentum of vigorous development and enjoy a very bright future, setting a good example of good-neighborly friendship and mutual benefit.

Wei said his visit demonstrated that China attaches great significance to and firmly supports Kazakhstan, noting that no matter what risks and challenges the two countries may encounter, they will jointly maintain regional stability and push ahead with the building of a community with a shared future for mankind.

In recent years, the exchanges and cooperation between the Chinese and Kazakh militaries in various fields have been fruitful, he said, adding that the Chinese military is willing to continue to expand cooperation areas with the Kazakh side and deepen military-to-military relations between the two countries.

On the same day, Kazakh Defense Minister Ruslan Zhaksylykov held a welcome ceremony for Wei and had formal talks with him.

The two officials exchanged in-depth views on the international and regional security situations, the situation in Ukraine and the Afghan issue, and agreed that the two militaries will continue to strengthen strategic communication, conduct joint drills and training, and carry out practical cooperation.