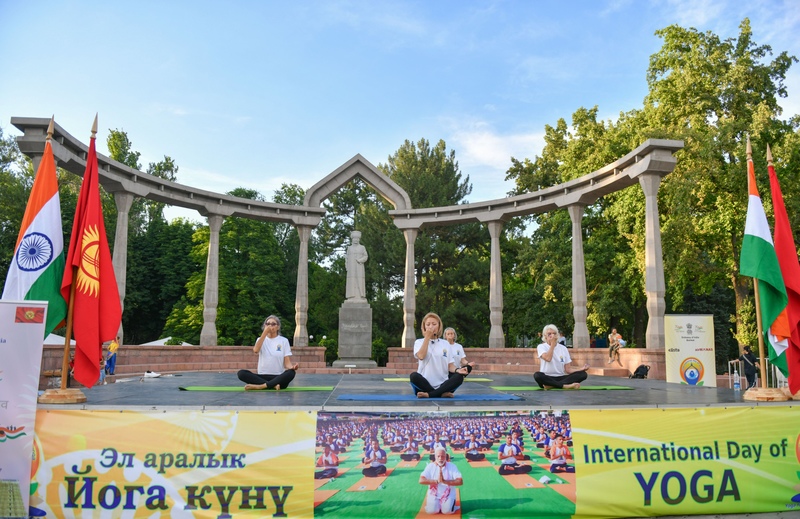 AKIPRESS.COM - 8th International Day of Yoga was celebrated in the iconic Kurmanjan Datka park in the centre of Bishkek city on the evening of June 18. The event was jointly hosted by Embassy of India and Bishkek Mayor’s office. Bishkek city government has been partner of Indian embassy in previous Yoga Day events too.

“Yoga for humanity” is the theme set by the United Nations for the celebration of International Day of Yoga 2022. This year's theme aims to focus discussions on the importance of yoga in serving better mental health practices in our lives.

Minister of Culture, Information, Sports and Youth Policy of Kyrgyz Republic Azamat Zhamankulov and Vice-Mayor of Bishkek city Victoria Mozgacheva were the Guests of Honour at the celebrations. The Minister took part in the Yoga practice session along with other participants.

A large number of Yoga enthusiasts representing different nationalities including Indian students gathered at the event to practice Yoga as well as to witness the event.

The Yoga session was led by Kyrgyz Yoga instructor Lunara and her team on stage, which was followed by scintillating Indian and Kyrgyz dance performances by children of Kauhar dance group, which enthralled the participants.

The International Day of Yoga is celebrated annually on June 21 since 2015, following its inception in the United Nations General Assembly in 2014. Yoga is a physical and mental practice which originated in India. Indian Prime Minister Narendra Modi, in his UN address in 2014, had suggested the date of 21 June, as it is the longest day of the year in the Northern Hemisphere and shares a special significance in many parts of the world.

On 11 December 2014, India introduced the draft resolution to declare June 21 as International Day of Yoga, in the United Nations General Assembly. The resolution received broad support from 177 Member States, including Kyrgyz Republic, who sponsored the text, which was adopted without a vote.