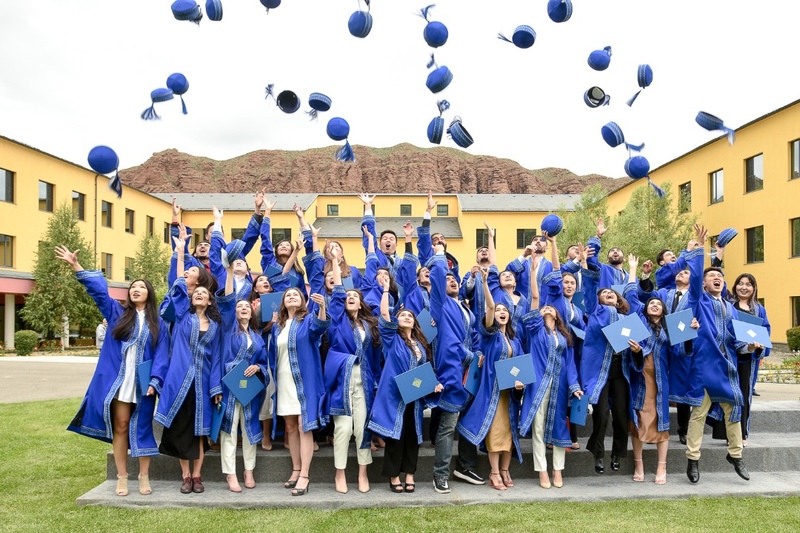 AKIPRESS.COM - The graduation ceremonies at the two campuses at Naryn and Khorog on June 18 brought together parents, faculty and many distinguished guests who came to congratulate the students for their academic achievements, and promises of successes yet to come.

Although a year has passed since the historic first graduation of UCA, for the second batch of graduates the year went by much too fast. Proudly displaying their graduation gowns, with its creative combination of motifs from the rich cultural traditions of Central Asia, the event began with a resounding applause as the graduates took their seats in anticipation of their degrees.

Among the many distinguished guests who spoke at the graduation ceremony was the Minister of Education and Science of the Kyrgyz Republic, Mr. Almazbek Beishenaliyev, who noted,“I am confident that UCA graduates will make a significant contribution to the development of not only Kyrgyzstan, but also of the entire region, and beyond”.

On behalf of the Chancellor, His Highness the Aga Khan, Princess Zahra Aga Khan, who is also a trustee of UCA, conveyed a special message of congratulations to the graduates. She also highlighted the global challenges of climate change, on which solutions and adaptative measures must be identified and implemented locally.

“The reason that UCA teaches Earth and Environmental Sciences is that climate change will affect Central Asia as it will the rest of the planet. It will force changes to the ways you grow and distribute food; to your approach towards resources; and to the way you will build houses in the future. It will also create a raft of new jobs and careers that will be essential in the decades to come”.

Dr. Shamsh Kassim-Lakha, Chairman of UCA’s Board of Trustees, emphasized the significant role people skills play in professional success. He added, “The education you have received was designed to instill in you a pluralistic mindset to help unify cultures and nationalities, prepare you for responsible citizenship, as well as ethical and enlightened governance; and to think logically and critically. In short, you have been provided resources to help you become leaders in whatever is your chosen career”.

Professor Sohail Naqvi, Rector of UCA, paying tribute to the students and their parents, noted that remaining true to the Chancellor’s vision, the graduates had strived to understand the needs and challenges of rural communities and how chart a path for their development.

Mr. Alisher Mirzonabot, Governor of Tajikistan's Gorno-Badakhshan Province, stressed on the high level of education UCA provides its students, and the importance of continuing education.

Speaking about the productive relationship between Naryn Oblast and the University of Central Asia, Governor Sabyrkul Ashimbaev appreciated some of the significant projects in the pipeline, such as the Naryn Master plan and the Smart City project, and funding from the Swiss Government to make the Naryn region more resilient and sustainable.

Sumaino Shakarbekova, the valedictorian of the class of 2022, expressed her gratitude to His Highness the Aga Khan, university administration, teachers, for the opportunity to receive a world class education. She shared her story as a young girl growing up in the remote Ishkashim District of GBAO, where girls don’t dare to dream big. But despite the odds she did dream big and achieved something no one from her village had.