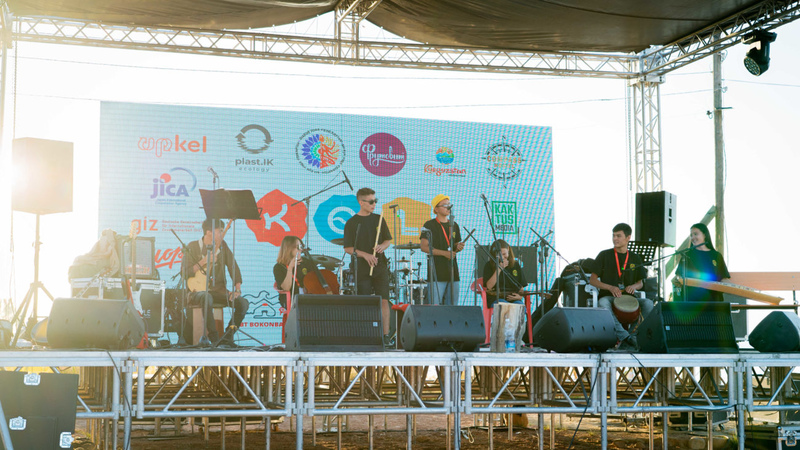 AKIPRESS.COM - Local sustainable development through a global arts and music event - that's the principle behind the Kyrgyz music festival Kol-Fest. Ahead of the festival's third edition, one of its founders, Chingiz Batyrbekov talks about how this can succeed and how Kol-Fest is changing the Central Asian music scene.

Three days full of music of various genres on three stages between art galleries and yurt camps overlooking Lake Issyk-Kul. Between July 15 and 17, the Kol Festival invites musicians, artists and visitors from all over the world to this experience.

After premiering in 2019 as Kyrgyzstan's first music festival and having to cancel in 2020 due to a pandemic, the festival's future was unclear last year. But founder and chairman Chingiz Batyrbekov, who is actually a political scientist and professor of human rights at the American University of Central Asia in Bishkek and former United Nations employee, was willing to take the risk and plan a major event in pandemic times. And the largely volunteer effort paid off. Exceeding all expectations, around 1000 guests attended the Kol Festival. In an interview with Novastan, Chingiz talks about the background of this success, how a music festival, sustainability as well as socio-economic development are connected and what he wishes for the future of Kol-Fest.

- How did the idea to hold a music festival in Kyrgyzstan for the first time come about?

In 2018, the World Nomad Games were held in Kyrgyzstan for the third time, and the interest of the tourism industry was immense. Kyrgyzstan became an interesting country with an interesting culture, which was still undiscovered by mass tourism. Acquaintances from Germany, who had also visited the Nomad Games, asked if there were any music festivals. At the time, there were not, but the Nomad Games showed that international events were possible, that the interest was there, and that tourists were coming to the country. Around the same time, the art and music scene was increasingly developing in Bishkek and the whole region. In Uzbekistan, the Stihia (electronic music festival on the bottom of the dried-up Aral Sea, editor's note) was already taking place. Several festivals were already going on in Kazakhstan.

Something was moving and it was a good moment to organize a music festival. So my friend David, who is a German diplomat but also DJs from Berlin in his spare time, and I went for it. We were able to recruit three other Germans for our project. At that time, the whole thing was an informal association among friends - some from the music industry, others from development cooperation. We were united by our values. Humanitarian development, the advancement of Kyrgyzstan in the world is important to all of us. And ultimately, the 2019 festival was a great success: we received positive feedback from the vast majority. We knew we had to continue.

- The first Kol Festival carried the theme Diversity and Interaction, last year it was Recovery. What does it look like this year?

This year our motto is Crossroads, which carries many meanings. On the one hand, it reflects our principle of intercultural encounter, and on the other hand, we are at a crossroads in light of the global political situation. And the Kol-Fest itself is also at a crossroads this year. This year we want to improve the infrastructural organization and decide what direction the festival should take in terms of audience and music. Our multi-genre concept allows to hear different genres in one place, but maybe it would be better to unite people who are totally into music. So we are faced with many questions about how to move forward.

- From your point of view, what makes Kol-Fest unique?

Our goal is to create a community-oriented setting where people of different cultures are connected by their shared values and interests. It's about enabling the experience of spending several days together, listening to music from all over the world of different genres. We want to bring together in a 50:50 ratio people from Central Asia and people from other parts of the world. We understood that Central Asian representation is very important. Unfortunately, we could not organize participation of Turkmen musicians, even though the contacts are actually there, but at least four out of five states are represented. All this makes our festival unique in any case.

- With the Kol Festival and the related tourism, you want to strengthen the sustainable development of the region. How do you estimate your impact? Are you in contact with the tourism industry and the population? How do they feel about the Kol Festival?

We have set up a forum this year with representatives from the tourism industry and other relevant stakeholders to discuss precisely the role of Kol Festival. Now that we are hosting the festival for the third time, we can better assess how it is perceived by the population.

We also received suggestions to hold the festival in a remote place. But it is important for us that the inhabitants of the villages are part of the Kol Festival, understand the values and see what it brings to them. This year we are also organizing a concert for the local people, on the one hand to say thank you and on the other hand to show that electronic music can be beautiful and they don't have to worry. Tourism associations, on the other hand, of course understand the influence of the Kol Festival. Even if the festival itself lasts only three days, many come back. Even people from Bishkek express surprise at how beautiful the south bank of the Issyk-Kul is. So, through the forum we want to see what the interests of us and the tourism industry are, where our common goals lie. The results of this will also point the way for the future of Kol-Fest.

- How has Kol-Fest impacted the Central Asian music scene so far?

When we started in 2019, there was not a single music festival of such scale in the country. And this summer, there are at least four major music events taking place in Kyrgyzstan, and that doesn't include the multitude of smaller events. Of course, I can't say that Kol Festival is responsible for that. But we see how our DJs are organizing more and more of their own projects, networking with other musicians. So Kol-Fest has become a kind of platform.

And regional networking within Central Asia has also increased. We are cooperating with Kazakhstan and Uzbekistan this year, including with the Stihia Festival, which is a big feature for us. We visited them, they visit us, we share the same challenges and we both have good approaches to solve them. We have also invited guests from the music and art industry from different countries to share their experiences with our musicians and artists. We have also set up a forum for this purpose.

Central Asian musicians and artists can learn within this framework how they can perform at international festivals, which platforms they can use, in other words, how they can integrate themselves into the international art and music industry. The Kol Festival wants to contribute to making the Central Asian music scene better known worldwide. In the early 2000s, there was a big festival movement from Western to Eastern Europe, so maybe it's our turn next (laughs).

- What is your vision for the future of Kol Festival?

First of all, our goal is to make Kol-Fest economically sustainable and make us independent from donor organizations. For example, this year we received a great support from the Swiss development agency but this is not sustainable in long-term. In addition to financing the festival itself, we aim to run an office year-round with a couple of permanent employees. Then we wouldn't have to pause for six months between events, we could stay in contact with the musicians and plan bigger projects. To realize this, I see a great opportunity in cooperation with our Central Asian partners. If we establish ourselves as a Central Asian Union, we could more easily take advantage of funding opportunities. Such a platform would give our musicians greater freedom outside the current limited framework. Only as a pop musician can you currently make a living from music. Otherwise, a musical career is difficult, for most it's more of a passion. Overall, we want to grow, but in small steps. We don't want to grow simply with the numbers, but in quality. The core community, our value base and our claim to sustainability should remain.