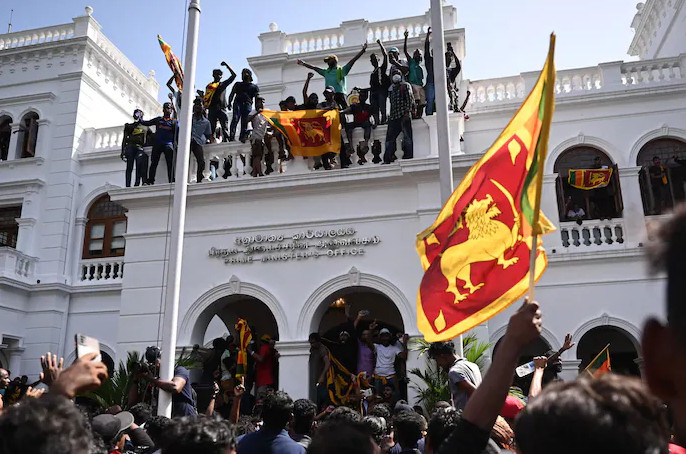 AKIPRESS.COM - Sri Lankan President Gotabaya Rajapaksa resigned Thursday from his sudden exile in Singapore, a day after fleeing the country he led for nearly three years, The Washington Post reported.

Forced out by a civilian uprising over the island nation’s economic collapse, the 73-year-old Rajapaksa had left Sri Lanka before dawn Wednesday to escape public fury over an economy in free fall. He kept his country on tenterhooks even as he was on the run, first flying to Maldives and then missing his self-declared deadline for stepping down.

The delay helped him escape while he still enjoyed presidential immunity, but his maneuver sparked fresh protests in which one person died. His ouster now sets off a full leadership struggle.

“The speaker has received a letter of resignation from President Gotabaya Rajapaksa via the Sri Lankan High Commission in Singapore,” a statement from Parliament Speaker Mahinda Yapa Abeywardena’s office said late. The statement, issued hours after Rajapaksa landed in Singapore, said a formal announcement will be made Friday after the letter is authenticated.

The streets of Colombo — under curfew for a second night — remained quiet as the news spread. Nearly a week of turbulence and the looming political chaos overshadowed the much-anticipated moment. Prime Minister Ranil Wickremesinghe is running the country as acting president.

On the majestic steps of the presidential office overlooking the Indian Ocean, where protesters had camped since Saturday, the mood was wary late Thursday. “We don’t trust Rajapaksa,” Marissa de Silva said. “We will have to wait till it’s officially announced tomorrow.”

Others said their movement was now about overhauling the system — that changing a person was not enough. “We will have to do this tenfold to send Wickremesinghe home,” university student Sandun Ravihara said. “He is also a symbol of everything Gota stood for.”

Rajapaksa’s exit brings a sordid end to the storied Rajapaksa dynasty that has dominated Sri Lankan politics for decades. Many hold the Rajapaksa family, which until recently also held the positions of prime minister and finance minister, responsible for the economic mismanagement that has brought the country to economic collapse.

The crisis has left Sri Lanka unable to repay its foreign debt and with little money to import much-needed fuel and food. Fuel is in dangerously short supply and prices for essential items like rice have doubled from a year ago.

Neighbouring India has committed more than $3 billion to debt-ridden Sri Lanka in loans, credit lines and credit swaps since January this year, as the island nation faces its worst economic crisis since independence.

The deposed president was allowed into Singapore on a private visit, a spokesperson for Singapore’s Foreign Ministry said in a statement.

“He has not asked for asylum and neither has he been granted any asylum. Singapore generally does not grant requests for asylum,” the statement said. It is unclear whether Rajapaksa will stay in Singapore for an extended period or move to another country soon.

Rajapaksa is expected to stay in Singapore for some time, according to Sri Lankan security sources, before potentially moving to the United Arab Emirates, AFP reported.

Diplomatic sources said Rajapaksa's attempts to secure a visa to the United States had been turned down because he had renounced his US citizenship in 2019 before running for President, AFP reported.

As the country waited for Rajapaksa’s resignation on Thursday, demonstrators withdrew from three major government buildings they had been occupying. Clashes with security forces left dozens injured, including a police officer and a soldier. The military barricaded the road leading to Parliament, one of the few political landmarks that protesters had not seized.

The leadership turmoil in the country threatens to pull the island nation deeper into a political abyss and risks further delay for a bailout package from the International Monetary Fund. Protesters and opposition leaders have criticized Wickremesinghe’s role as acting president, further complicating his challenge to take charge.

Oshantha Dabare said protesters were leaving voluntarily. “Our objective of deposing the president has been achieved. We are leaving in strength,” he said.

The protesters have vowed to continue pushing for political change. Their demands include an interim government that will investigate allegations of corruption levied against Rajapaksa and his powerful family, as well as assistance with acquiring food and cooking gas.

The public’s loss of faith in their political leaders has left officials shaken. Sri Lanka’s top uniformed official, Gen. Shavendra Silva Sr., asked citizens during a Wednesday night news conference to maintain order. He was flanked by the chiefs of the army, navy and air force.

“We call on all the people and the youth to be peaceful during this period until a new president is appointed,” he said.

Financial experts say an agreement with the IMF, which is essential for economic recovery, can only be formalized when there is stable political leadership. The negotiations have been disrupted by the recent turmoil.

Manjuka Fernandopulle, a lawyer specializing in debt restructuring, said bondholders are “looking for a partner that believes in continuity, has credibility, legitimacy and confidence reposed in them by the people.”