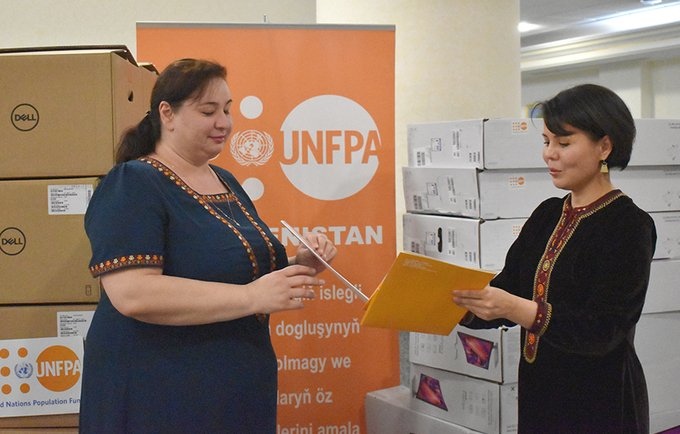 AKIPRESS.COM - The Population and Housing Census 2022 in Turkmenistan will be conducted on 17-27 December using the digital technologies. To this effect, UNFPA, United Nations Population Fund supports the Government of Turkmenistan with the procurement of the needed equipment and today transferred the first batch of equipment to the State Statistics Committee of Turkmenistan. This procurement is being implemented using the funds provided by the Government in support of the joint UNFPA and State Statistics Committee preparation efforts for the upcoming census.

Use of the tablets will shift the census process from ‘paper and pen’ to digital. The equipment delivered by UNFPA today includes 180 computers, powerful servers and storages that will allow data from the tablets to automatically transfer to a central database of the State Statistics Committee and will ensure accuracy and quality of census data.

The information gathered from the citizens and people in Turkmenistan will not require people to provide proof of identity when filling out the questionnaire. The received data in the tablets will be encrypted and after processing, they will be presented in an aggregated way to a wide range of actors, including the central and sectoral ministries, policy decision-makers, the scientific and business communities, among others.

“This year on World Population Day it was announced that later this year the world’s population is projected to reach 8 billion -- another milestone in the rapid growth of the number of people on this planet,” said Ayna Seyitlieva, UNFPA Turkmenistan Head of Office. "The diversity in population dynamics that we see today requires much more granular data for better and smarter policies. The upcoming census will provide a unique opportunity for Turkmenistan to generate, disseminate and use disaggregated data for domestic strategic planning and policy development."

UNFPA is the lead agency to provide technical and methodological support to the Government of Turkmenistan to ensure that census will be of high quality, upholds international principles and standards and will produce data that is widely disseminated and utilized for development.

As part of the Census 2022 preparation, State Statistics Committee continues to follow the recommendations issued by the UN high-level expert mission organized by UNFPA in April 2022. The Mission got acquainted with the progress of preparations for the upcoming December 2022 census and concluded that the Government of Turkmenistan is on a solid track to conduct a population and housing census using the most contemporary approaches and technologies and releasing the preliminary and final results in timely and comprehensive manner.

UNFPA, together with the support of the office of the United Nations Resident Coordinator and other UN agencies, continue supporting the Government in undertaking the Census, which is one of the most significant historical processes. This year UNFPA’s partnership will extend to technical advisory support, procurement, capacity building throughout the census process. The most important part of the UNFPA partnership will be the support in analyzing the census data, disseminating and utilizing it for the national development programmes.