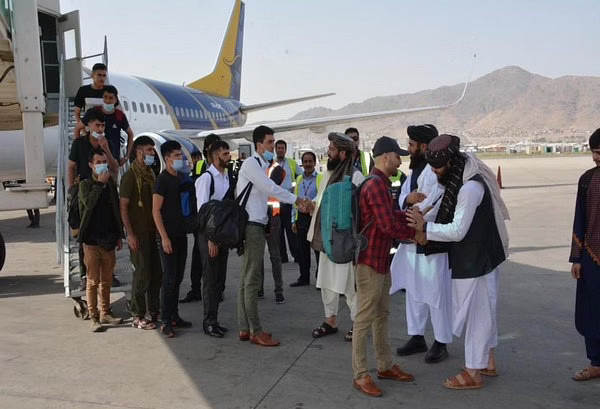 Afghan cadets trained in India get warm welcome in Kabul

AKIPRESS.COM - In a sign of the Taliban’s warming up to India, the Kabul regime on Friday rolled out the red carpet for a batch of Afghan Military cadets who returned to Kabul after completing their training in India, Asiana Times reported.

Around two dozen of Afghan Military cadets, who returned to Kabul, had passed the Indian Military Academy (IMA) in Dehradun on June 11.

Afghanistan’s Ministry of Defence (MoD), encouraged by our humanitarian aid and placement of our technical team at Indian Embassy in Kabul, had requested Indian government through an official letter in June requesting direct communication with the Afghan cadets trained in IMA and National Defence Academy, India.

Government of India facilitated talks between Afghanistan’s MoD and Afghan cadets and they finally returned after assurances of safety and employment from the Afghan Minister of Defence on July 28,” Taliban led Defence Ministry said in a statement on the return of Afghan cadets.

All 25 cadets of the Afghan military academy were sent to India for training before the Taliban came to power, against whom they were taught to fight. The warm welcome of India-trained Afghan cadets by the Taliban government reflects Kabul’s growing closeness to New Delhi.

According to some Afghan officials, the Taliban-led Afghan government is keen to use the skills of these cadets to maintain security in the country. After the regime change in the country, no new cadets came to IMA for training.

Ever since the Taliban came to power in Afghanistan last year, the Afghan National Army has ceased to exist, erasing hopes of any such training possibilities for Afghan cadets in future. However, with the kind of welcome the cadets received while reaching Kabul, the hopes are raised high for new Afghan cadets coming to India for training.

Earlier in February, amid reports of detention and execution of Afghan security personnel by the Taliban, the Indian defence ministry had facilitated a prolonged stay for close to 80 Afghan cadets from various Indian military training institutions.

India also provided them with a 12-month English course under the Indian Technical and Economic Cooperation Programme. That also came after the Afghan cadets refused to return to their country. Some sought asylum in India, the US and other western nations.

In the past, India has supported and promoted the cause of Afghanistan’s democratically elected government. India has contended that because the Taliban did not represent the will of the Afghan people, they were not elected and lacked legitimacy.

India has been advocating for any peace process to be Afghan-led, Afghan-owned, and Afghan-controlled.