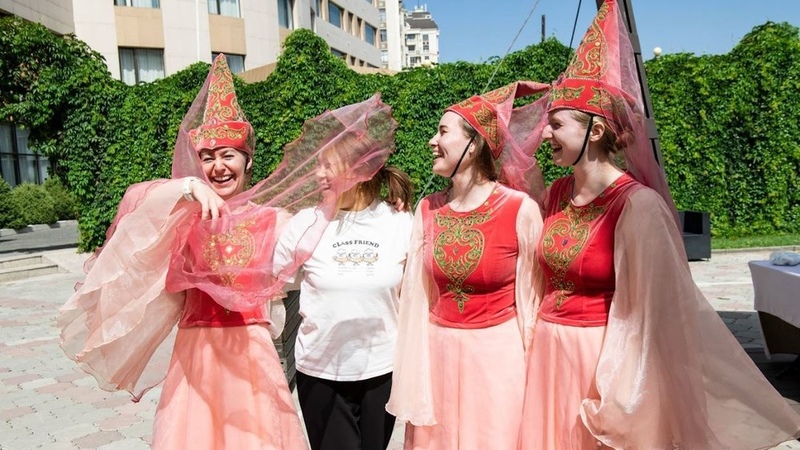 AKIPRESS.COM - A new group of 10 Peace Corps volunteers were sworn in Bishkek, the U.S. Embassy announced.

Over the next two years, volunteers will be co-teaching English with local teachers in secondary schools across Chuy, Naryn, Issyk-Kul and Talas regions.

Representatives of the Ministry of Education and Science, Ministry of Foreign Affairs, U.S. Embassy, Peace Corps Volunteers and staff, counterparts and directors of host schools, and other guests attended the ceremony.

By working alongside local English teachers in secondary schools, Volunteers will exchange teaching best practices, support students in their English-learning journey, and provide assistance to their schools and communities in establishing or expanding English teaching resources. They will serve as regular members of the teaching faculty in their schools and will be involved in extracurricular activities, such as conducting English clubs and computer training.

Prior to today’s swearing-in ceremony, these Volunteers completed an eight-week training program, which included Kyrgyz language and culture lessons and technical teacher training that prepared them for their two-year assignments across the Kyrgyz Republic.

Addressing Volunteers, the Chargé d’Affaires Sonata Coulter said: "You will join an illustrious group of 1,250 Peace Corps Volunteers who have provided over 2,000 years of service to the Kyrgyz Republic and its people since the program was established here in 1993…You represent the best of America and its tradition of volunteerism. Just as you will have an enormous, positive impact in the communities in which you serve, your host family, students, and fellow teachers will have an enormous, positive impact on you as well as you build friendships and learn about Kyrgyz culture and traditions."

Since President John F. Kennedy established the Peace Corps by executive order on March 1, 1961, over 220,000 Americans have served in 140 host countries. Peace Corps service is a 27-month commitment, and the mission is to promote world peace and friendship and a better understanding between Americans and people of other countries. Visit www.peacecorps.gov for more information.