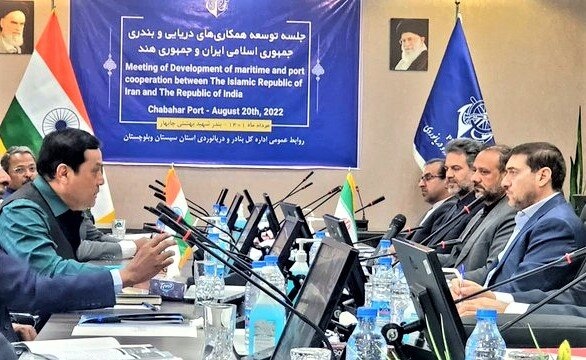 AKIPRESS.COM - India’s Minister of Ports and Shipping Sarbananda Sonowal has said the Indian government is committed to equipping and developing Chabahar port and will make its utmost effort for turning the port into a regional and international transit hub, Tehran Times reported.

Sonowal made the remarks in Chabahar on Saturday during his meeting with Deputy Minister and Head of Iran’s Ports and Maritime Organization (PMO) Ali-Akbar Safaei in which the two sides discussed the development of maritime and port cooperation between the two countries, the PMO portal reported.

The strategic role of Chabahar port to unlock trade potential in the regional trade between Central Asia, South Asia and South East Asia and even from Far Eastern countries like Japan and Korea is huge, he said, adding that India was continuously working towards making the International North South Transport Corridor as the preferred route of trade between the two regions.

After meeting with Sonowal, Safaei told the press that Iran expects the Indian government to increase engagement in Chabahar port.

“We expect the activity of the Indian government to increase in Chabahar port,” he said. “We encourage both sides to fulfil their commitments regarding Chabahar port,” Safaei added.

Emphasizing that Chabahar will be open to all neighbouring countries as a gateway for trade, the Iranian Deputy Minister said: "We are sure that with the practical actions taken by India and Iran, we will witness the increasing prosperity of Chabahar port.”

Iran’s First Vice President Mohammad Mokhber during his meeting with Indian minister described the development of Chabahar Port as a great opportunity for the people of Iran, India and the region and emphasised increasing investment in this important and strategic port.

He said that the completion of construction and operation of this port will extremely increase trade exchanges and North-South Transport Corridor.

The Indian Minister arrived in Tehran on August 19 to discuss the expansion of cooperation with Iranian authorities. Under a 10-year agreement with Iran, India has committed to developing and operating Shahid Beheshti terminal in Chabahar, located on the Sea of Oman in southeast Iran.

Earlier this month, the Indian Ministry of Port and Shipping celebrated “Chabahar Day” in Mumbai to reiterate its commitment to developing the southeastern Iranian port which is going to connect India to Central Asian markets through the International North-South Transport Corridor.