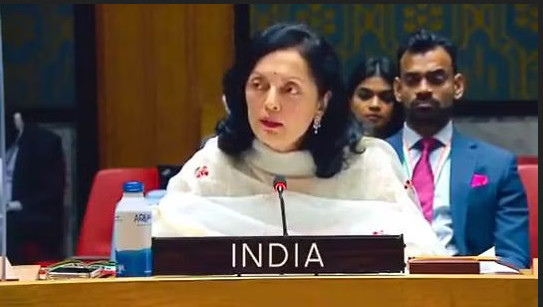 AKIPRESS.COM - Highlighting that the challenges the world is confronted with cannot be dealt with through outdated systems and governing structures, India on Monday said that the most urgent need of the hour is to make the United Nations Security Council more representative of developing countries to reflect current geopolitical realities, The Times of India reported.

At a UNSC briefing on "Maintenance of International Peace and Security: Promote Common Security Through Dialogue and Cooperation", India's Permanent Representative to the UN, Ruchira Kamboj noted, "The most urgent thing therefore for us to do is to make the Security Council more representative of developing countries, so as to reflect current geopolitical realities."

Making a case in point, she questioned, "How do we explain away the fact that the African continent does not have a permanent representation in the Security Council, despite a majority of issues being dealt with by the Council belonging to that region? How can we aspire for common security in Africa when the body denies them representation on a permanent basis."

The Indian envoy stressed that "a truly representative Security Council is the most pressing need of the hour," and cautioned "else, there is a real danger of the United Nations being superseded by other plurilateral and multilateral groupings which are more representative, more transparent and more democratic and, therefore, more effective."

Speaking at the briefing she highlighted that as a founding member of the UN, India has consistently displayed its commitment to upholding the purposes and principles of the UN Charter. "We have been the leading advocate of the concerns and aspirations of developing countries and the creation of a more equitable international economic and political order."

The Indian Diplomat took pride in mentioning India's role in the UN peacekeeping missions. "We have contributed immensely to maintaining international peace and security as one of the largest troop-contributing countries towards UN Peacekeeping Missions, having sacrificed the highest number of lives in that noble endeavour."

"India has been playing its part in being a trusted and reliable partner for all, based on our ancient Indian ethos that sees the world as one family. However, the question remains. Are multilateral organizations, especially the Security Council, ready to deal with the new world order and new challenges? In my country, which now represents more than one-sixth of humanity, we believe that until we "reform, perform and transform" multilateral governance structures, we would be continuing to found wanting."

Speaking on common security, Kamboj underscored that any coercive or unilateral action that seeks to change the status quo by force is an affront to common security. "Common security is only possible when countries respect each others' sovereignty and territorial integrity, as they would expect their own sovereignty to be respected."

She said that common security is also only feasible when all countries stand together against common threats such as terrorism and do not engage in double standards while preaching otherwise. "Common security is also possible only if countries respect agreements signed with others, bilateral or multilateral, and do not take unilateral measures to nullify those very arrangements to those they were party to."

Calling the meeting an opportune moment, Indian envoy to UN noted India's call for reformed multilateralism which she said is "at the core of which lies the reform of the UN Security Council."

Reiterating that UN must relook at the way it governs, the Indian envoy pointed out, "at the same time, going into the third decade of this millennium, we need to ask ourselves, has the UN lived up to its expectations? The requirements and challenges of our present and future are vastly different from those of the past. The world today is very different from the world of 1945, when the UN was established. Is the UN, particularly the Security Council which is the foremost organ tasked with the responsibility of maintaining international peace and security, able to remain relevant?"

Commenting on the current security situation, she said "an armed conflict in one part of the world has cascading effects on the people of another. We have seen the effect of the Ukraine conflict on other developing countries, particularly, on the supply of food grains, fertilizer and fuel. The impact of the crisis in Afghanistan is still being felt throughout the region."

Appreciating that the UN has been at the forefront of dealing with many challenges like these, the envoy noted that such efforts however have been partial or intermittent at best, as "we have invariably stopped short of providing effective and durable solutions."

"One of the guiding questions posed by the Presidency for today's meeting is what constitutes common security?" she said.

"We are firm in our commitment to uphold the purposes and principles of the UN Charter. The underlying principles behind 'common security' lie in upholding the rules-based international order, underpinned by international law, premised upon respect for the sovereignty and territorial integrity of all Member States, resolution of international disputes through peaceful negotiations and free and open access for all to the global commons."