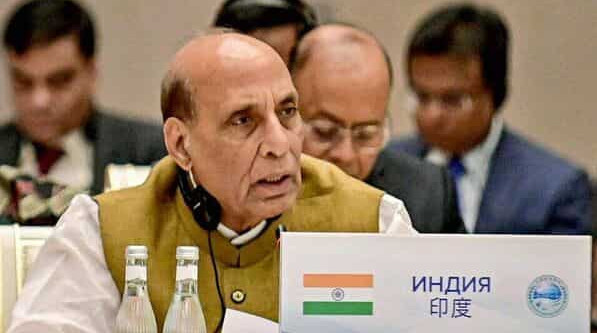 AKIPRESS.COM - Afghanistan’s sovereign territory should not be misused to intimidate or attack any other country, Indian Defence Minister Rajnath Singh said in Tashkent on Wednesday, Afghanistan Times reported.

Addressing the Defence Ministers’ meet at the 24th edition of the Shanghai Cooperation Organisation (SCO) in the Uzbekistan capital, Singh further reiterated India’s support for a “peaceful, secure and stable” Afghanistan, in light of the Taliban’s takeover of the war-torn nation in August 2021.

He added that Afghan territory must not be used to intimidate or attack any country by providing safe havens & training to terrorists and supporting their activities through financial assistance,” the Defence Ministry stated.

Rajnath Singh also expressed India’s “concern” over the conflict in Ukraine and called for a resolution through talks, with 24 August marking exactly six months since Russia began its military operations.

The Defence Minister said members of SCO were “common stakeholders in the region” and urged stronger ties within the organisations, with India assuming presidency next year, after Uzbekistan.

The SCO is a Eurasian organisations aiming to strengthen political, economic and security cooperation among eight member states, four observers, six dialogue partners and several guest attendees including the UN. China, India, Kazakhstan, Kyrgyzstan, Russia, Pakistan, Tajikistan and Uzbekistan are among the members while Afghanistan is an observer.