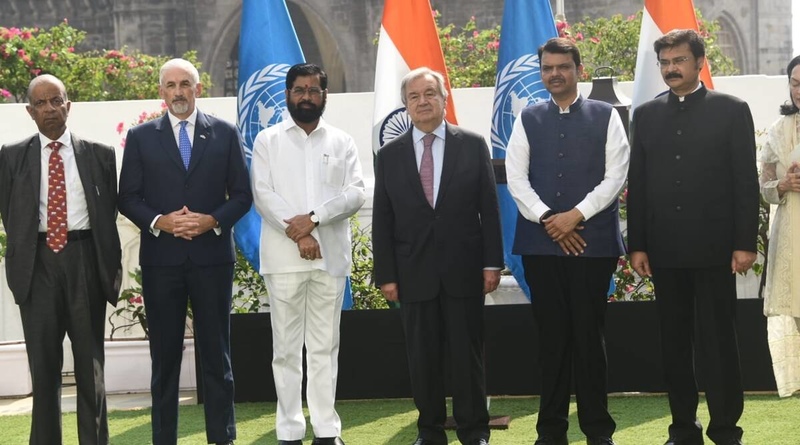 AKIPRESS.COM - UN Secretary-General Antonio Guterres paid tributes to victims of 26/11 terror attacks at Taj Mahal Palace hotel in Mumbai, India and said terror is an absolute "evil" and no reason can justify the act of terrorism, Business Standard reported.

Guterres made an official visit to India from October 18-20, 2022. This was his UNSG's first visit to India, since he commenced his second term in office in January 2022. He had earlier visited India (in his first term) from 01- 04 October 2018.

"Terror is absolute evil. There are no reasons, no pretext, no causes, and no grievances that can justify terrorism. terrorism is absolute evil. It has no room in today's world," Guterres said while addressing the presser at Taj Mahal Hotel.

UN Chief, who came to India on Wednesday, visited the Taj Hotel on Wednesday and laid a wreath in honor of all those who sacrificed their lives in the 26/11 Mumbai terror attack.

UN Chief further said, "I feel deeply moved to be here where one of the barbaric terrorist acts in history took place where 166 people of different nationalities, lost their lives. I want to pay tribute to the victims they are heroes of all world and I want to express my deepest condolences to their families, to their friends, to the people of India, and to all those that are coming from other parts of the world that have lost their lives in Mumbai."

The office was created with the intention to cooperate with member states in order to provide the kind of systems and advice and training that is necessary for all countries to be prepared to be able to prevent and simultaneously fight against terrorist acts.

On November 26, 2008, 10 Lashkar-e-Taiba (LeT) terrorists Mumbai through sea and open fire, killing 166 people, including 18 security personnel, and injuring many during the three-day siege in Mumbai.

Modi and Guterres on Thursday launched the Mission LiFE (Lifestyle for Environment) movement in the Indian State of Gujarat. Speaking at the occasion, Guterres said, "Let us count on India, as it is going to assume the G20 presidency, to help usher in a new era of sustainability fully line in its history, culture and its edition."

UN Chief congratulated India for its upcoming G20 presidency and said that G20 countries account for 80 per cent of global greenhouse gas emissions but it also represents 80 per cent of global GDP. "G20 combined as resources, they have the power to end the war against nature and set us on course towards sustainable living," he added.

UN Chief said that the best part of the LiFE movement is that individuals also participate in the mission. "Individuals and communities can and must be a part of the solution of protecting our planet and our collective future people individually are participating in this," he added.

Envisaged by PM Modi, Mission LiFE is expected to be an India-led global mass movement that will nudge individual and collective action to protect and preserve the environment, said India’s Ministry of External Affairs.

Mission LiFE will be India's signature initiative at the United Nations and other international platforms for showcasing climate action and early achievement of the Sustainable Development Goals.

Mission LiFE follows a three-pronged strategy. First is encouraging individuals to practice simple yet effective environment-friendly actions in their daily lives. Second is enabling industries and markets to respond swiftly to the changing demand. Third is influencing governments to support sustainable consumption.