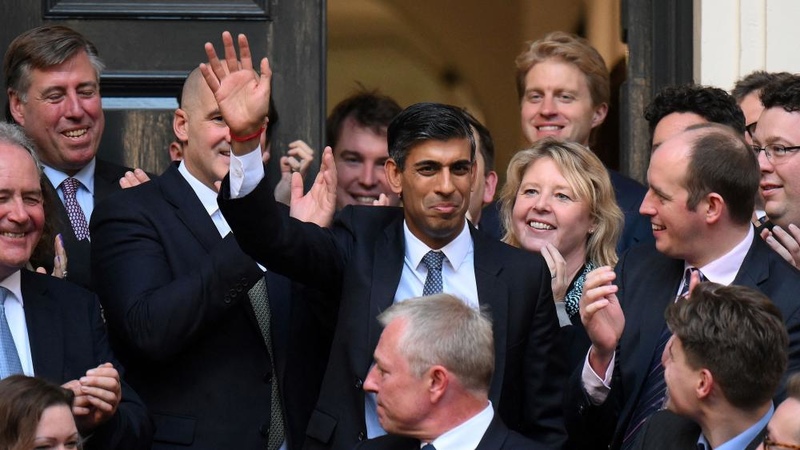 AKIPRESS.COM - After Liz Truss stepped down as PM of the United Kingdom on October 20, former Chancellor Rishi Sunak becomes the first Indian-origin person to lead UK, The Guardian reported.

In a historic development, Britain got its first Asian-origin Prime Minister in Rishi Sunak to lead the nation. Sunak also becomes the first Indian-origin British Premier. Liz Truss, who stepped down as the PM of the United Kingdom on October 20, congratulated Sunak on being appointed as Leader of the Conservative Party and the UK's next Prime Minister.

"Congratulations @RishiSunak on being appointed as Leader of the Conservative Party and our next Prime Minister. You have my full support," tweeted Truss. Here is a quick guide to the UK's next PM Sunak.

The former Chancellor of the Exchequer made a high-stakes gamble. He launched an attack that helped to end Boris Johnson's premiership, put himself forward as his replacement, but ultimately lost to Liz Truss. Admitting defeat, he retreated to the parliamentary back benches. He lost to Liz Truss in September, but she resigned six weeks later. In the latest leadership contest, Sunak racked up the support of his fellow MPs early, and fast.

He crossed the 100 nominations he needed long before the deadline - including from MPs that had previously backed Truss or Boris Johnson. He will become the first Indian-origin person to lead the UK - and at the age of 42, he is also the youngest person to take the office in more than 200 years.

Sunak first publicly declared on Sunday morning that he would be standing in the contest. In a tweet, he wrote, "The United Kingdom is a great country but we face a profound economic crisis. That's why I am standing to be Leader of the Conservative Party and your next Prime Minister. I want to fix our economy, unite our Party and deliver for our country."

Sunak, whose parents came to the UK from East Africa in the 1960s, is of Indian descent. His father was a local doctor while his mother ran a pharmacy in southern England, something Sunak says gave him his desire to serve the public.

He will also be the first Hindu to become British prime minister, securing the position on Diwali, the festival of lights that marks one of the most important days of the Hindu calendar. Sunak himself made history in 2020 when he lit Diwali candles outside 11 Downing Street, the official residence of the UK chancellor.

Sunak will also possibly be the UK’s first teetotal prime minister since David Lloyd George. There is no clear prohibition on alcohol in Hinduism, but many Hindus choose not to drink.

He has faced challenges over his elite background, having studied at the exclusive Winchester College, Oxford and Stanford universities. He is known for his expensive taste in fashion and has worked for banks and hedge funds, including Goldman Sachs.

Sunak's election on Monday marks the pinnacle of what has been a speedy rise to power. He was first elected as an MP in 2015 and spent two years on the back benches before becoming a junior minister in Theresa May's government. Johnson gave Sunak his first major government role, appointing him as chief secretary to the Treasury in 2019 and promoting him to chancellor in 2020.

He was the first person who 'predicted' financial problems under Truss. He clashed with the former PM during the previous leadership race, claiming her plan to borrow money during an inflation crisis was a "fairytale" that would plunge the economy into chaos.

Sunak was first elected as an MP in 2015 - for Richmond in north Yorkshire - but rose quickly, and was made finance minister - or chancellor - in February 2020 under Boris Johnson. Sunak was in charge of Covid support cash, the financial aid during lockdowns - including furlough payments and the "Eat Out to Help Out" scheme for restaurants.

His wife is Akshata Murthy, the daughter of Indian billionaire Narayana Murthy. Sunak faced controversy over his wife's tax arrangements.

Over the summer, it emerged Akshata Murthy paid no UK tax on big earnings abroad - which is legal. Sunak defended his wife saying, "to smear my wife to get at me is awful" - but eventually she agreed to start paying extra taxes. It was also found he temporarily had a US green card, allowing him to live permanently in America while he was the UK's chancellor. He campaigned for Brexit and deregulation. "Free ports" are one of his long-time favourite ideas: areas near ports or airports where goods can be imported and exported without paying taxes, to encourage trade.

However, Sunak faces an enormous task. The UK is in the midst of a deep cost-of-living crisis and soaring inequality. Financial markets are still spooked after Truss' disastrous economic policy missteps.

The Conservative party, already unpopular after 12 years in power, has plunged itself into a state of utter chaos over the past four months and is now well behind the opposition Labour party in opinion polls. The only comfort for Sunak is that he doesn't have to call an election until January 2025.