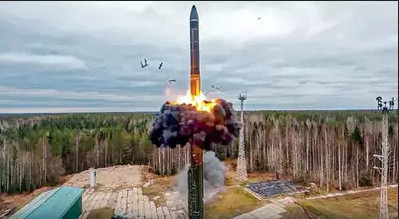 AKIPRESS.COM - With Russia conducting an exercise of its nuclear forces to flex muscles after accusing Ukraine of planning to use a “dirty bomb”, India on Wednesday stressed that no side should exercise the nuclear option in the ongoing conflict that has already hit the global economy with major disruptions in trade, food, and fuel supplies, The Times of India reported.

India’s Defence minister Rajnath Singh, in a 25-minute telephonic conversation with his Russian counterpart Sergei Shoigu on October 26 told him that there was an urgent need to resolve the conflict with Ukraine through dialogue and diplomacy. “Singh pointed out that the nuclear option should not be resorted to by any side as the prospect of the usage of nuclear or radiological weapons goes against the basic tenets of humanity,” an Indian defence ministry statement said.

Shoigu briefed Singh on the deteriorating situation in Ukraine, including “his concerns about possible provocations through the use of a dirty bomb”, while discussing the conflict as well as bilateral defence cooperation. “Both ministers agreed to remain in touch,” the statement added.

In a call to his Chinese counterpart Wei Fenghe also on Wednesday, Shoigu voiced similar concerns over Ukraine planning the use of a dirty bomb in the conflict. The conversations took place at Shoigu’s initiative amidst the escalation of hostilities between Russia and Ukraine, with Washington earlier this week telling Moscow that its allegations of Kyiv preparing a dirty bomb were “patently false”.

Unlike tactical or strategic nuclear weapons, which Ukraine does not have, a dirty bomb is basically a radiological dispersal device that combines radioactive material like Uranium with conventional explosives like dynamite or TNT.

Russia’s outreach to India and China on Wednesday came even as President Vladimir Putin observed his strategic forces conduct an exercise, which included ballistic missiles, nuclear submarines and strategic bombers, to test responses to a nuclear strike.

Unlike western countries led by the US, India has tried to strike a balance in the Russian-Ukraine conflict in keeping with its own strategic interests. Prime Minister Narendra Modi has talked to both Putin and Ukraine President Volodymyr Zelenskyy to call for an early cessation of hostilities and the need to pursue the path of dialogue and diplomacy.

“Today's era is not an era of war,” Modi told Putin on the sidelines of the Shanghai Cooperation Organisation (SCO) conclave in Samarkand last month.