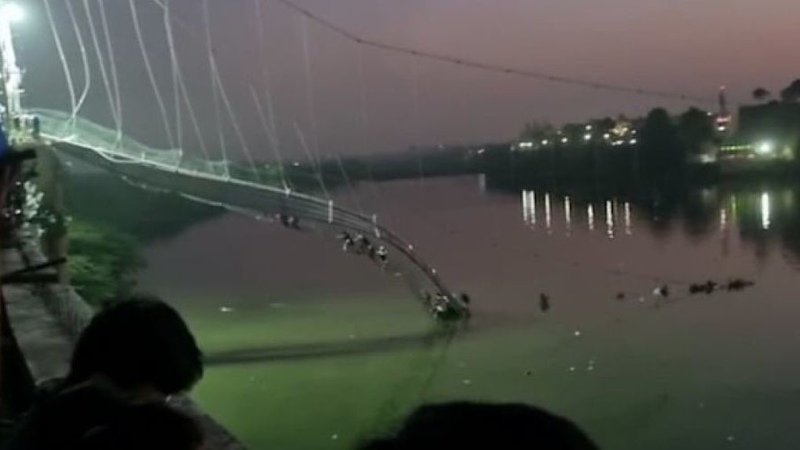 AKIPRESS.COM - At least 141 people died after a British-era bridge in Gujarat's Morbi collapsed last evening. While 177 people have been rescued so far, a search operation is underway for several others who are still missing, NDTV reported.

The suspension bridge, around 300 km from Ahmedabad, collapsed at 6.42 pm on Sunday when around 500 people had congregated on it to perform some rituals for the Chhath puja.

Gujarat Home Minister Harsh Sanghavi, in a press briefing this morning, said that a criminal case has been registered and a five-member high-powered committee is probing the bridge collapse. "The rescue teams and officials worked all through the night," he said.

About 19 people have been admitted to the hospital with serious injuries, officials said, adding that the rescue work is being carried out using boats.

Eyewitnesses say there were several women and children on the nearly 150-year-old bridge when cables supporting it snapped, sending scores of people tumbling into the river below.

The bridge over the Machchhu river had been shut for seven months for renovation. It was reopened to the public on October 26, the Gujarati New Year.

The renovator of the century-old bridge that collapsed in Gujarat's Morbi city had not taken a fitness certificate from the authorities before reopening it, local municipal body's chief Sandipsinh Zala told NDTV.