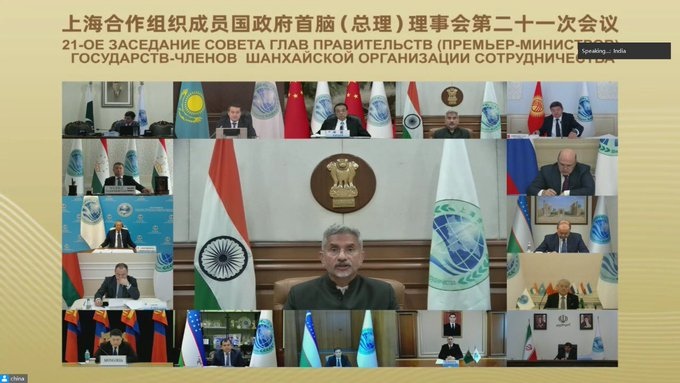 AKIPRESS.COM - The 21st Meeting of SCO Council of Heads of Government (CHG) was held in a virtual format on Tuesday, which was hosted by Chinese Premier Li Keqiang. The SCO CHG meeting focused on trade and economic agenda of the organization, Infra reported.

India's External Affairs Minister S. Jaishankar represented the country at the meeting. Speaking virtually at the meeting, Jaishankar said that the Chabahar port can help in unlocking the economic potential of SCO region.

The Indian minister said Chabahar port and the International North-South Transport Corridor could help improve connectivity and fulfilment of economic potential in the region.

"Will unlock the economic potential of this region in which Chabahar port and the International North South Transport Corridor could become enablers. Connectivity projects should respect the sovereignty and territorial integrity of Member States and respect international law," he added.

He further said "India’s total trade with SCO Members is only $141 billion, which has potential to increase manifold. Fair market access is to our mutual benefit and the only way to move forward". The connectivity projects in the SCO region must focus on the interests of central Asian nations.

India remains actively engaged in various SCO activities and dialogue mechanisms in the region as well as other multilateral cooperation within the SCO framework.

The leaders of the SCO member-states met last month for the summit meeting at Samarkand in Uzbekistan on 16 September. The meeting in which Indian Prime Minister Narendra Modi participated, adopted Samarkand declaration. The member-states also called for improvement of the SCO activities and the development of efficient transport corridors for inter-connectivity.

A joint communique issued at the end of the meeting said Kazakhstan, Kyrgyz Republic, Pakistan, Russia, Tajikistan and Uzbekistan reaffirmed their support for China’s BRI and to work jointly to implement the project. India was not among the SCO-member countries that supported the BRI.